Cardiogram, a company that offers an app able to break down heart rate data collected by the Apple Watch, today shared the results of a new study that suggests the Apple Watch can be used to detect the signs of diabetes.

Cardiogram researchers teamed up with the University of California, San Francisco and used the Cardiogram DeepHeart neural network to determine that heart rate data collected from the Apple Watch was 85 percent accurate at distinguishing between people with diabetes and people without diabetes. 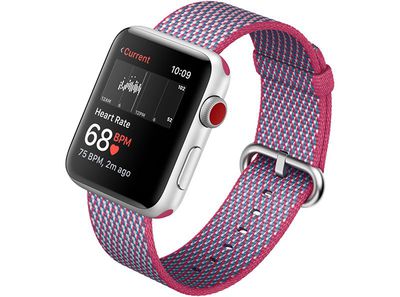 For the study, Cardiogram used more than 200 million sensor measurements from 14,011 participants using an Apple Watch or Android Wear device and the Cardiogram app, aggregating data that included heart rate, step count, and other activity.

Prediabetes is a condition that often goes unnoticed and undiagnosed because traditional methods of detection require glucose-sensing hardware. Detection via the Apple Watch and an AI-based algorithm like Cardiogram's DeepHeart has the potential to alert users that there's an issue so they can then follow up with a medical professional.

According to Cardiogram, its study is the first large-scale study that demonstrates how an ordinary heart rate sensor, like the one in the Apple Watch and other devices like the Fitbit, can detect early signs of diabetes. Because the pancreas is connected to the heart through the nervous system, the heart rate variability changes when a person begins experiencing diabetes symptoms.

Over the course of the last year, Cardiogram and UCSF have teamed up to do a lot of research into the potential for wrist-worn heart rate sensors to detect serious health conditions. Previous studies have shown the Apple Watch heart rate sensor's ability to detect conditions that include hypertension, sleep apnea, and atrial fibrillation.

While there's still a long way to go before research proves whether the Apple Watch can officially detect early health problems, Cardiogram plans to implement new features to incorporate DeepHeart directly into the Cardiogram app in the future, which will allow users to be alerted if early signs of disease are detected.

Apple has also launched its own study in partnership with Stanford to determine whether the heart rate sensor in the Apple Watch can be used to detect abnormal heart rhythms and common heart conditions.

You can also participate in Cardiogram's studies by installing the Cardiogram app and signing up to join the mRhythm study.

Herky68
I believe that many of you don't understand just how much effort and expense apple has spent on developing this research program. I signed up late last year, and several weeks ago they notified me that they had read an irregular heart rhythm on my app. I called them, talked to a Dr. on line, they sent me a state of the art medical monitor the size of an Apple watch which is applied with a sticky tape over my heart for 7 days, I kept it attached for a week, sent it back (post payed) and they contacted me within 3 days, they had me contact one of their research Drs. who went over the results of the week long monitor, they saw no further arrhythmia , and gave me confidence that the earlier abnormal pattern was not a problem , readings showed my heart strong, and healthy. My heart has a minor abnormal pattern that I have known about for 45 years, and I've had numerous heart evaluations required by my employers. I have worn a Holter Monitor numerous times, it's bulky , hard to sleep with, and only records a day or two, the device that Apple sent me totally blew me away, light, you can shower with it on, and records on an internal chip an entire week of heart activity. Please give Apple the respect they deserve for truly using their research budget to start the next generation of wearable health monitors. Yes, I'm a Fan.
Score: 21 Votes (Like | Disagree)

Or you could have your doctor test your blood sugar every few months or whenever, thereby catching pre-diabetes early enough to perhaps prevent the full blown thing.

Or you could do both. It's not about choosing one or the other, but integrating daily monitoring into one's life without any additional inconveniences.
Score: 19 Votes (Like | Disagree)

BigMcGuire
Just signed up for the app and study. Kinda cool how it shows your stats versus other people your age. Also signed up for the heart study. I’m in the Apple Heart Study as well. Hope it helps someone.
Score: 8 Votes (Like | Disagree)

Apple_Robert
Like Big Mac, I just signed up and am now in both studies. I am all for being a lab rat if it can help me or someone else.
Score: 7 Votes (Like | Disagree)

This kind of stuff is approaching clairvoyant...

It won't tell you what to do. It will tell your insurance company what you've been doing...
Score: 5 Votes (Like | Disagree)

Who “believed” that? Unless Apple said an oximeter was under development, why should anyone take issue with that not being available three generations later?

Some people don't understand what they word "rumor" means. They take everything printed on the internet to be fact and then get mad when it doesn't come true.
Score: 4 Votes (Like | Disagree)
Read All Comments