The iOS 11.3 update, seeded to developers and public beta testers last week, introduces ARKit 1.5, an upgraded version of the set of tools developers can use to create augmented reality apps for the iPhone and the iPad.

As it turns out, ARKit 1.5 can do a lot of neat things. It can map irregularly shaped surfaces for better detection of your surroundings, and it can also recognize and map vertical surfaces like walls and doors, so you can use AR to place and detect items on walls.

Over the course of the last week, developers have been testing out ARKit 1.5 and sharing short demo videos on Twitter, providing a look at just what will be possible with augmented reality apps when iOS 11.3 is available. 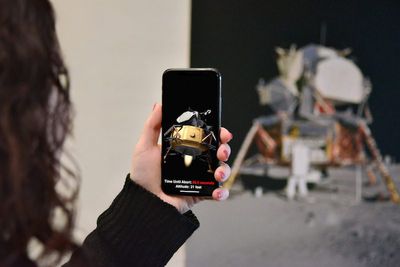 Vertical surface detection, for example, is shown off in the video below. A realistic-looking tunnel is projected on a wall, and while this doesn't have any immediate usage implications, it's a useful demo of how ARKit sees walls in iOS 11.3.

An example of how vertical plane detection can be used in augmented reality games is demonstrated in the video below, where creatures projected into open space take advantage of the area around them.

Another demo adds virtual artwork to a blank wall, a concept that could potentially be used in an art gallery or museum where art is invisible without a smartphone.
Vertical plane detection is used in the video below to show a realistic-looking virtual cockatoo coming through a window and landing on a windowsill.

In addition to mapping oddly shaped spaces and recognizing vertical surfaces, ARKit 1.5 also includes image detection features that work on everything from movie posters to barcodes, as demoed below. In the future, you might be able to scan a barcode with ARKit to get a virtual popup of nutritional information, calories, and more.

In ARKit 1.5 reference images can be any image. Including barcodes!!!! #ARKit #AugmentedReality pic.twitter.com/8fwJTcSoRo — azamsharp (@azamsharp) January 31, 2018

Image detection could be useful in settings like art galleries and museums, where visitors could use it to scan paintings and exhibits to receive more information, as shown off in the video below.

Though not visible in the demo videos shared by developers, ARKit 1.5 also introduces a higher camera resolution, so passthrough video is 1080p rather than 720p, and there's also support for autofocus capabilities, another feature that will improve the augmented reality experience on iOS devices.

Recent data has suggested that the ARKit framework has seen only modest adoption from developers and stagnating growth since its debut in iOS 11, but improvements like ARKit 1.5 may change that in the future. Augmented reality on iOS devices is still in its infancy and it will take time for developers and users to discover the best real-world use cases for the technology.

Apps using ARKit 1.5 will be available starting this spring when iOS 11.3 is released to the public.

itsmilo
Not hating but is anyone actually really using AR to advance their daily work flow? I have yet to find any use for it. I feel like even on Pokemon Go most people turn AR off

Its just weird to hold your phone up on your face like that and spin around like a crazy person. Imagine using it in combination with Siri haha smartphone zombies 2.0
Score: 17 Votes (Like | Disagree)

HiVolt
I've tried a few of the AR "measuring/ruler" apps. What a horrible waste of time, inaccurate by several to over a dozen feet at times.
Score: 12 Votes (Like | Disagree)

User 6502
Gimmick was gimmick remains. Maybe in a few years it will become actually useful, for now it's a waste of time. I remember some people here saying that iOS 11 would be revolutionary because of AR. LOL :D
Score: 7 Votes (Like | Disagree)

trip1ex
I loved this part from the article: "In the future, you might be able to scan a barcode with ARKit to get a virtual popup of nutritional information, calories, and more. "

As opposed to reading the label next to the barcode.
Score: 6 Votes (Like | Disagree)

OutSpoken
I don’t want to seem ignorant to new tech but. ...yeah im not seeing the value in AR yet... even furniture mapping apps like the ikea one was very disappointing.

The real question for me is, how is AR going to enhance my daily life?
Score: 6 Votes (Like | Disagree)

Dan Holmstock
Sorry ... again this is a yawn. It’s fun to try but like my google daydream it gets old.
Score: 6 Votes (Like | Disagree)
Read All Comments