Apple and its manufacturing partner Foxconn have confirmed instances of students working overtime to assemble the iPhone X, and both companies are now taking remedial action, as reported by the Financial Times. 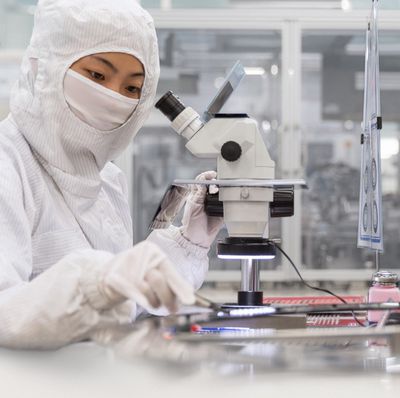 A technician inspecting iPhone components at a factory
Apple conducted an audit and confirmed "instances of student interns working overtime at a supplier facility in China," according to the report. "We've confirmed the students worked voluntarily, were compensated and provided benefits, but they should not have been allowed to work overtime," it added.

Foxconn said that "all work was voluntary and compensated appropriately," but admitted that the interns "did work overtime in violation of our policy," which reportedly prohibits interns working more than 40 hours per week.

"We are being forced by our school to work here," said Ms Yang, an 18-year-old student training to be a train attendant who declined to use her first name for fear of punishment. "The work has nothing to do with our studies." She said she assembled up to 1,200 iPhone X cameras a day.

The students, aged 17 to 19, reportedly said they were told that a three-month stint at the factory was required "work experience" that they had to complete in order to graduate from Zhengzhou Urban Rail Transit School.

Foxconn is believed to hire a significant number of seasonal workers each year to assemble the latest iPhone models in time for the busy holiday shopping season. The report, citing an anonymous Foxconn employee, said there can be up to 300,000 workers producing up to 20,000 iPhones per day.

As part of its supplier responsibility efforts, Apple requires its manufacturing partners like Foxconn to limit working hours to no more than 60 hours a week, with a mandatory rest day once every seven days.

GadgetBen
This is a problem with China, not Apple.
Score: 18 Votes (Like | Disagree)

This is a problem for Apple, which chooses to have its manufacturing done in China and does not want its reputation and values sullied by child labor.

It’s a bit unsettling knowing our iPhones could have been assembled by high school students. These kids must have some mad skills and a hell of a work ethic. It’s a bit intimidating that our own kids will be competing with these young people in an increasingly global economy.
Score: 17 Votes (Like | Disagree)

That's a ridiculous comment - Apple chooses to assemble its products there. They don't choose to do it anywhere else, including their own country, they choose to do it in a place where they know this does and will happen so they can save money. They enable it and therefore it's also their problem.
Score: 17 Votes (Like | Disagree)

grobik
Record profits. Apple is taking action yes, but they are also the company that will find another manufacturer if quotas are not met.
Score: 14 Votes (Like | Disagree)

Good on Apple for taking action, and I hope this also gets the attention of Wisconsin. As for the situation in China, that school should be investigated and that teacher jailed but it probably won’t happen.

That's only half the story, Apple isn't innocent in all this. They're the ones putting pressure on the likes of Foxconn to manufacture x amount of iPhones. This gets fed down the system and it's ultimately the workers who pay with poor pay packets, unreasonable working hours and poor working conditions.
Score: 12 Votes (Like | Disagree)

Best part of all this? You don’t even work for Apple haha
Score: 10 Votes (Like | Disagree)
Read All Comments