Apple appears to have made an exception to its rule that developers "embrace the notch" on the iPhone X, by approving an app called Notch Remover for the App Store.

Essentially, all the app does is add a black bar across the top of selected images that the user can then manually assign as a wallpaper in iOS Settings. 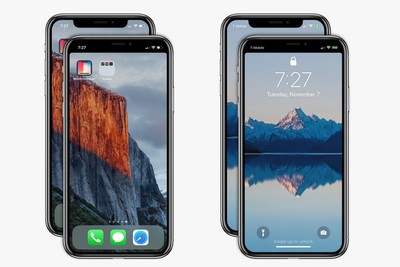 The result conceals the existence of the notch and the adjacent "ears" with what looks like a solid black status bar along the top of the lock screen and home screen.

The one-trick nature of the app is unlikely to have been overlooked by Apple and approved in error, suggesting that the company doesn't interpret its function as a violation of iPhone X developer guidelines.

Don't mask or call special attention to key display features. Don't attempt to hide the device's rounded corners, sensor housing, or indicator for accessing the Home screen by placing black bars at the top and bottom of the screen.

The notch houses Apple's TrueDepth camera and Face ID technology, but it eats into the viewing area of the OLED display. Its existence has divided Apple fans, but many iPhone X owners say that they don't really notice it after a few days or even just a few hours with the device, after which it ceases to be an issue for them.

Still, if the notch just isn't your thing, Notch Remover offers to mitigate the screen intrusion for just $0.99, while Notcho does something similar.

Wow...it actually looks so much better without the notch....who knew?

Personally I got really used to the notch really quickly and I find the iPhone X looks too old-fashioned when the notch is removed (as it looks like a 6/7/8, etc) and somehow restrictive

maflynn
I'm not a fan of the notch, but those screen shots seem to make it worse imo. Maybe I'm getting used to the notch
Score: 20 Votes (Like | Disagree)
Read All Comments