Games Are Most Popular ARKit-Only Apps, Accounting for 62% of ARKit App Revenue

Apps that use the ARKit framework Apple introduced in iOS 11 have been installed 3 million times around the world since September 19, according to new data shared today by analytics firm Sensor Tower (via TechCrunch).

Many of the ARKit-only apps that are available are games, accounting for 35 percent of ARKit apps worldwide. ARKit-only apps include those that are built entirely around the new ARKit technology, rather than apps that have added some ARKit features. 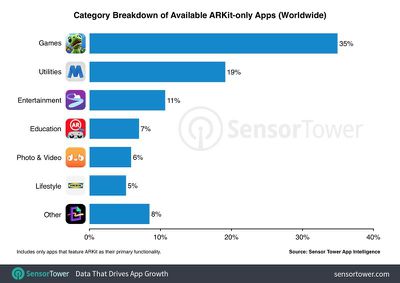 Utilities are the second most popular ARKit category, accounting for 19 percent of apps, while 11 percent of ARKit apps are in the Entertainment category and 7 percent are in the Education category.

Many of the top ARKit-only apps are games, with four games among the top five highest-grossing ARKit apps. Titles like AR Dragon, Zombie Gunship Revenant, The Machines, and Monster Park -- Dino World have proven to be the most popular AR games with consumers.

Games have accounted for a total of 53 percent of all ARKit-only app downloads and 62 percent of ARKit app revenue since the launch of ARKit.

With games taken out of the top app listings, apps that allow users to measure 3D spaces or demo furniture are some of the top performers. Among free apps, IKEA Place, the furniture app from IKEA that lets consumers see products in their homes before purchasing, is one of the more popular apps.

Sensor Tower's data covers only apps that are primarily focused on the augmented reality experience and it did not take into account apps that offer limited ARKit content like photo modes or mini games.

When iOS 11 launched on September 19, ARKit became the largest augmented reality platform in the world thanks to the huge number of iPhones and iPads out in the wild.

Apple CEO Tim Cook just this week said augmented reality may not be huge right now, but that it will experience a "dramatic" climb to take over the world much like the App Store did when it was first launched.

840quadra
I originally discounted this as being relatively useless technology. I know there is a lot of complex calculations and machine learning behind the scenes, just felt like a solution to a problem we don’t yet have.

That said, I have finally used an ARKit app to help diagram a structure / and some bollards at work. I tried it out as more of a toy, but came away impressed with how well the phone (iPhone 7) could track it’s location, keeping the structure in the same spot on the ground.

I am not that interested in games, but would love to see more productivity development, and, this technology put into a wearable or something a bit more immersive than holding up a screen.
Score: 4 Votes (Like | Disagree)

Avieshek
I prefer the graphics of Infinity Blade III than some AR game OF Pokémon, Digimon, Jigglypuff.
Score: 3 Votes (Like | Disagree)

Try walking around a little bit. I tested it pretty thoroughly in an office setting on a 6S, and found that it's too unreliable for anything more serious than a game. Perhaps with an iBeakon setup it could work better...

I did, and it still tracked quite well.

One thing to note, our phones aren't as optimized for this tech as the 8, and the upcoming X. The fact that it works as well as it does, is still something to appreciate.
Score: 1 Votes (Like | Disagree)

There will never be a mass market wearable for AR like glasses. People won’t buy that and wear it. That’s just a fact.

You’ll likely see stores like Wal-Mart integrate AR mapping in the app so you can follow arrows on the display to quickly find a particular product in the store. As for other things, devices will need hardware for, like LIDAR systems and dot projection stuff so the computer can tell you what things in your environment are because it can see them as opposed to trying to describe things in 2D which is what they currently do, and why they can’t, because 2D is astronomically more difficult because it gives the computer far less data to ascertain what the object is.

If we get to the point that AR features could be integrated into normal looking eyewear then I suspect someone will create an item people will buy. Never say never.
Score: 1 Votes (Like | Disagree)
Read All Comments