Playboy's 1985 Interview With Steve Jobs is Well Worth a Read

Following yesterday's news of the death of Playboy founder Hugh Hefner, Cult of Mac chose to highlight the magazine's 1985 Steve Jobs interview, which still remains one of the most insightful reads about the early life and influences of the late Apple co-founder. 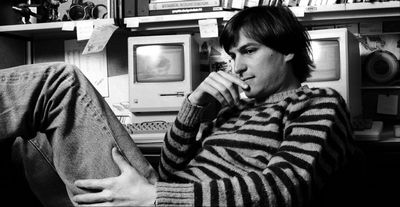 Quite apart from its centerfolds, Playboy magazine built an enviable literary legacy and earned a reputation for serious journalism in its 60-plus years, carrying interviews with such notable figures as Martin Luther King Jr, Stanley Kubrick, Bette Davis, and Miles Davis.

The year that Jobs was forced out of Apple and started NeXT Computer, he sat down with the magazine to share his enthusiasm for computers, his hopes for the future, and the early days of the internet. The interview was conducted by David Sheff. Some choice quotes appear below, but you can read the full interview here.

I'm not going to let it ruin my life. Isn't it kind of funny? You know, my main reaction to this money thing is that it's humorous, all the attention to it, because it's hardly the most insightful or valuable thing that’s happened to me in the past ten years. But it makes me feel old, sometimes, when I speak at a campus and I find that what students are most in awe of is the fact that I’m a millionaire.

When I went to school, it was right after the Sixties and before this general wave of practical purposefulness had set in. Now students aren't even thinking in idealistic terms, or at least nowhere near as much. They certainly are not letting any of the philosophical issues of the day take up too much of their time as they study their business majors. The idealistic wind of the Sixties was still at our backs, though, and most of the people I know who are my age have that engrained in them forever.

On his relationship with Steve Wozniak in 70s California:

I think Woz was in a world that nobody understood. No one shared his interests, and he was a little ahead of his time. It was very lonely for him. He's driven from inner sights rather than external expectations of him, so he survived OK. Woz and I are different in most ways, but there are some ways in which we're the same, and we're very close in those ways. We're sort of like two planets in their own orbits that every so often intersect. It wasn't just computers, either. Woz and I very much liked Bob Dylan's poetry, and we spent a lot of time thinking about a lot of that stuff. This was California. You could get LSD fresh made from Stanford. You could sleep on the beach at night with your girlfriend. California has a sense of experimentation and a sense of openness—openness to new possibilities.

On the problem of new technologies overtaking the old:

That's inevitably what happens. That's why I think death is the most wonderful invention of life. It purges the system of these old models that are obsolete. I think that's one of Apple's challenges, really. When two young people walk in with the next thing, are we going to embrace it and say this is fantastic? Are we going to be willing to drop our models, or are we going to explain it away? I think we'll do better, because we're completely aware of it and we make it a priority.

On why people will buy computers in the future:

The most compelling reason for most people to buy a computer for the home will be to link it into a nationwide communications network. We're just in the beginning stages of what will be a truly remarkable breakthrough for most people — as remarkable as the telephone.

vannibombonato
“The most compelling reason for most people to buy a computer for the home will be to link it into a nationwide communications network. We're just in the beginning stages of what will be a truly remarkable breakthrough for most people — as remarkable as the telephone.”

nextuser
Jobs: That’s simply untrue. As soon as we can lower prices, we do. It’s true that our computers are less expensive today than they were a few years ago, or even last year. But that’s also true of the IBM PC. Our goal is to get computers out to tens of millions of people, and the cheaper we can make them, the easier it’s going to be to do that. I’d love it if Macintosh cost $1000.

infinitejest
I miss those days when he was still around :(
Score: 11 Votes (Like | Disagree)

gixxerfool
Say what you will about the man, you can’t argue he had vision. This is more true now than ever.

Jobs: The developments will be in making the products more and more portable, networking them, getting out laser printers, getting out shared data bases, getting out more communications ability, maybe the merging of the telephone and the personal computer.
Score: 9 Votes (Like | Disagree)

Now students aren't even thinking in idealistic terms, or at least nowhere near as much. They certainly are not letting any of the philosophical issues of the day take up too much of their time

I remember a Jobs-hating writer back then saying how stupid, presumptuous, and vapid that was. Funny that I don't remember today who that writer was, nor do I care. Steve Jobs, on the other hand, I miss just about every day.
Score: 7 Votes (Like | Disagree)
Read All Comments

Sunday September 25, 2022 6:50 am PDT by Sami Fathi
Apple may decide to release its remaining products for 2022, which include updated iPad Pro, Mac mini, and 14-inch and 16-inch MacBook Pro models, through press releases on its website rather than a digital event, according to Bloomberg's Mark Gurman. In his latest Power On newsletter, Gurman said that Apple is currently "likely to release its remaining 2022 products via press releases,...
Read Full Article • 199 comments