Since at least the iOS 11 beta, the App Store has been prioritizing old reviews from several years ago for some users. Now that the software update is publicly released, we're starting to receive more user reports about the change. 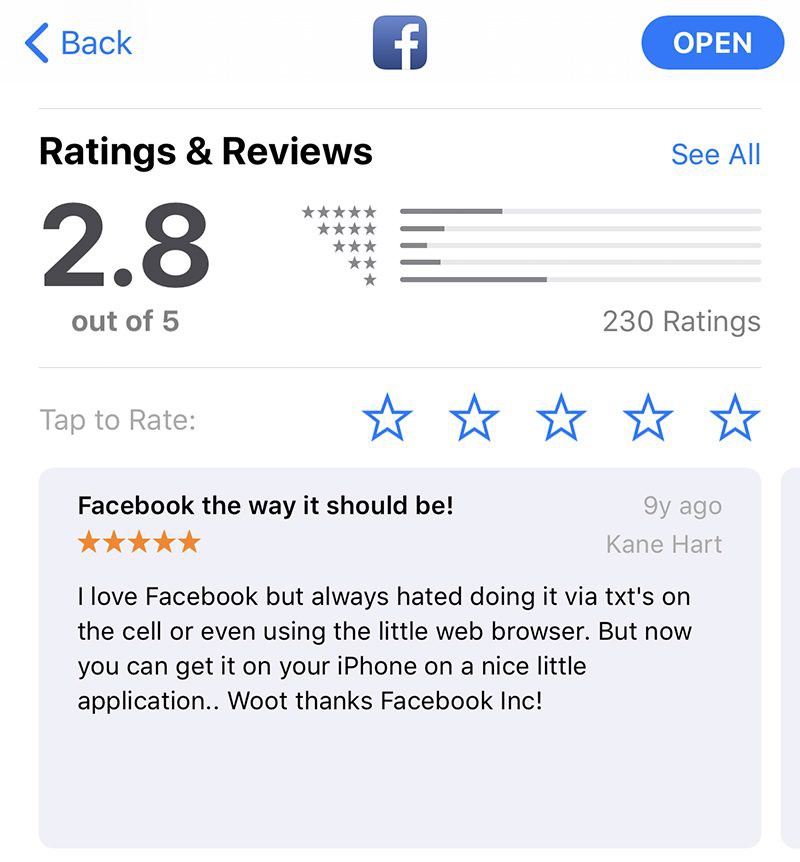 Similarly, the first review I can see for the Skype app is seven years old. The reviewer said he was glad the app finally has the ability to make phone calls over a 3G network, a feature added way back in May 2010.

The top reviews for Google's app are six to nine years old
It's worth noting that I live in Canada. A few MacRumors editors living in the United States checked the App Store and saw much newer reviews for the Facebook app, although they were shown a three-year-old review for the Google app.

A handful of MacRumors forum members living in the United States report seeing very old reviews, however, so there doesn't appear to be any consistency to this change. Your mileage may vary completely.

"Now I have to wade through 6-yr-old app reviews, which are worthless," said MacRumors forum member AllergyDoc, whose location is listed as Utah.

"For example Evernote, the first four reviews are older than three years old," said MacRumors forum member vahdyx, who lives in Colorado. "One of the reviews were from when Obama was a new president."

Many users are frustrated because Apple currently provides no way to sort the reviews in a different order on iOS 11.

Ideally, the App Store should be displaying reviews in reverse chronological order to ensure the newest comments are at the top. A few slightly older reviews mixed in is surely fine, but reviews from 2008 aren't particularly helpful.

Previously, reviews would only show for the latest version of an app, but that is currently not the case on both iOS 10 and iOS 11.

It's quite possible that this is simply a bug, and if so, it's probably an easy fix that might not even require a software update. MacRumors has reached out to Apple for comment, and we'll update this article if we hear anything back.

whyamihere
I appreciate the consistency. Making the app store reviews as useless as its search.
Score: 12 Votes (Like | Disagree)

hassaan22
The new App Store review sorting is so horrible. Makes reviews pretty useless when the only reviews you see are 2+ years old and are completely irrelevant to the app’s state today
Score: 11 Votes (Like | Disagree)

simonmet
This is kind of funny but it also highlights deeper and more serious issues at Apple if this sort of thing can make it to released software. It’s basically just incompetence.

Those massive bold fonts and layout are even more offensive than the old reviews.
Score: 9 Votes (Like | Disagree)

Superhappytree
Still finding this redesign to be so utterly terrible. It’s much harder to read reviews; I spent a minute just looking around to find the “See All” button to read all reviews which isn’t even a button, it’s just tossed to the side in blue text. Have to figure out where the size of the app is which is all the way at the bottom. Too much blinding white space everywhere. Laggy when scrolling with constant frame drops everywhere. Just terrible.
Score: 8 Votes (Like | Disagree)

Sirious
9 years ago... Whoaaaa.
The nostalgic feeling is real though!

They should allow you to sort ratings/reviews by date.
Score: 5 Votes (Like | Disagree)
Read All Comments