iFixit has completed a teardown of the Apple Watch Series 3, which has a virtually identical form factor as previous models. 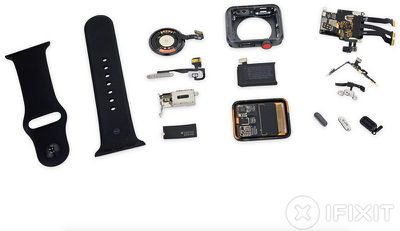 The display is unchanged from the Series 2, with one key difference being that it now functions as a multifrequency antenna for cellular. Series 3 models support LTE and UMTS, according to Apple's tech specs.

Apple said Series 3 models with cellular get up to 18 hours of battery life, including four hours of LTE and 14 hours of connection to an iPhone via Bluetooth. Series 2 models are also rated to last 18 hours with mixed usage.

iFixit was surprised that Apple managed to increase the battery size while still leaving room for the added functionality of cellular antennas, radios, power amplifiers, the embedded SIM card, and so on in the same form factor.

The embedded SIM, outlined in red, appears to be sourced from ST Microelectronics, and it is positioned next to a Wi-Fi module from Broadcom and other RF chips that enable cellular capabilities in the watch.

Last, we finally know what the tiny meshed hole is next to the diagnostic port: it's an air vent, since the Apple Watch Series 3's new barometric altimeter took over the vent's previous location next to the microphone.

I hope we see some real world battery life for the same watch when NOT on LTE. I want to get the GPS version. Since Apple tends to underestimate I'm hoping we get 24-26 hours of uses when not using LTE.

I just upgraded from a Series 0 to the LTE Series 3.

So far I am very impressed with the improved battery life.

Yesterday I was up at 7am and used the watch all day. (included a 45 min working with the heart rate monitor on) At 11pm I still had 70% battery remaining.

I had my phone with me, so I doubt I used any cellular data that day.
So my guess is that you may be able to get 24 hours with the GPS version.
Score: 3 Votes (Like | Disagree)

What kind of air flow could they possibly get through that vent when it is almost constantly occluded by a watch band?

I don’t think that’s its purpose. There’s no fan so there really isn’t any airflow at all. I’m not an electrical engineer but my guess that I think the main purpose of to just have an outlet to let the hot air out when there’re build up of pressure inside the watch housing as it’s not good to have a totally closed enclosure for any electronic device.
Score: 3 Votes (Like | Disagree)

What kind of air flow could they possibly get through that vent when it is almost constantly occluded by a watch band?

They need almost zero flow. It just needs to move enough air to equalize the pressure inside and outside the watch. It's a minuscule requirement.
Score: 2 Votes (Like | Disagree)

MrXiro
I hope we see some real world battery life for the same watch when NOT on LTE. I want to get the GPS version. Since Apple tends to underestimate I'm hoping we get 24-26 hours of uses when not using LTE.
Score: 1 Votes (Like | Disagree)

They need almost zero flow. It just needs to move enough air to equalize the pressure inside and outside the watch. It's a minuscule requirement.

44267547
It's pretty unbelievable the amount of technology that can incorporated into such a small casing that can fit in the palm your hand. And yet it's features and capabilities have something for everybody to convenience us in fitness and communication.
Score: 1 Votes (Like | Disagree)
Read All Comments