Apple is planning to build a new data center in Waukee, Iowa, according to a meeting agenda published by the Iowa Economic Development Authority Board and shared by The Des Moines Register.

At a meeting that will take place Thursday morning, the board plans to review Apple's application for investment in the city and will "consider an undisclosed amount of incentives" to encourage Apple to build the data center. 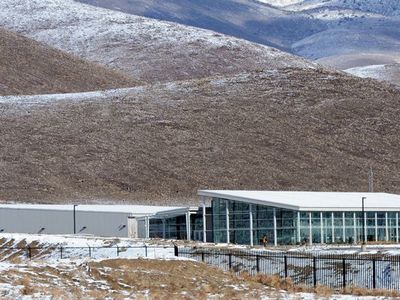 An Apple data center in Reno, via the Reno-Gazette Journal
While the agenda simply suggests Apple is planning some kind of project in Waukee, sources that spoke to The Des Moines Register have said Apple will build a data center, joining Microsoft, Facebook, and Google, companies that also have data centers in the area.

Update: Iowa's Economic Development Authority approved a deal on Thursday that will give Apple $208 million in state and local tax breaks to construct two data centers near Des Moines. The new data centers will create approximately 50 jobs, and Apple will buy 2,000 acres of land for the project, allowing for future development.

Microsoft and Facebook have multiple data centers in the Des Moines area, apparently due to cheap land and ample access to water.

The other large piece of that is low, stable electricity costs. I would guess that with over a 1/3 of the energy produced in Iowa coming from wind that doesn't hurt as well. Iowa is 2nd to Texas in terms of over all installed capacity, but 1st

Microsoft and Facebook have multiple data centers in the Des Moines area, apparently due to cheap land and ample access to water.

The other large reason is access to low, stable electricity prices. I am sure it doesn't hurt that the electricity provider they would utilize is aiming to have its wind generation account for roughly 90% of its electric retail load.
Score: 3 Votes (Like | Disagree)

Microsoft and Facebook have multiple data centers in the Des Moines area, apparently due to cheap land and ample access to water.
Score: 2 Votes (Like | Disagree)

Good. Apple should continue to add and expand data centers so that it can eventually fully replace AWS, Azure, etc. and lower iCloud pricing. $9.99/month for 2 TB is a great price (almost everyone else charges twice as much).

I'd be happy with 1TB for $5. That could store all my stuff and more.
Score: 1 Votes (Like | Disagree)
Read All Comments

Saturday February 4, 2023 1:30 am PST by Hartley Charlton
Google's Chromium developers are working on an experimental web browser for iOS that would break Apple's browser engine restrictions, The Register reports. The experimental browser, which is being actively pursued by developers, uses Google's Blink engine. Yet if Google attempted to release it on the App Store, it would not pass Apple's App Review process. Apple's App Store rules dictate...
Read Full Article • 204 comments