Sonnet today released a Thunderbolt 3 to dual DisplayPort adapter compatible with both Mac and Windows PCs. 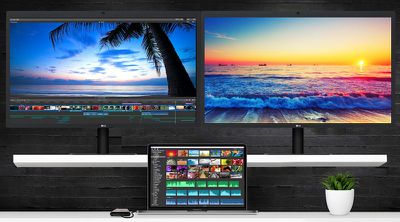 The bus-powered device enables users to connect up to two 4K Ultra HD displays or one 5K display with DisplayPort to a single Thunderbolt 3 port, each at 60Hz, including the 2016 or later MacBook Pro. The adapter also works with displays with lower resolutions like 1,920×1,080 or 2,560×1,600.

Sonnet's Thunderbolt 3 to dual DisplayPort adapter can be purchased on its website for $79 in the United States, although the company's press release says it has a suggested price of $89. DisplayPort cables are sold separately.

StarTech also sells a Thunderbolt 3 to dual DisplayPort adapter for $78.99 on B&H, but it's only compatible with Windows.

Perhaps, but this seems to come up often in even the Thunderbolt threads, and some of the warnings don't make it clear.

Thunderbolt carries two separate DisplayPort streams (4 "virtual" lanes each) encoded into the thunderbolt signal. So, you've always been able to daisy chain displays using Thunderbolt. However, Thunderbolt 1 and 2 had the restriction that you could only extract one DisplayPort stream per thunderbolt peripheral - so each display had to be attached to a separate Thunderbolt device (or be a Thunderbolt display). So, you couldn't daisy-chain a DisplayPort device direct from a TB display, but if you chained a TB dock or disc drive between them, it worked. If you see a TB1/2 dock with dual display outputs, its probably relying on "DP Hub" and won't work on a Mac.

TB 3 peripherals, however, can use both DP streams in the same device - TB3 needs this to be able to run a 5k display, which needs two DP1.2 streams. It also makes dual-display devices possible. The give-away is that these devices can support dual 4k displays at 60Hz - impossible with a single DP1.2 stream.

So, yeah, one big reason to pay for a TB3 dock over a cheaper USB-C dock is if you're using 4k displays. Even though a USB-C dock can support a single 4k display @ 60Hz, that uses up all the high-speed wires will throttle any other devices on the dock to USB2 speed.
Score: 4 Votes (Like | Disagree)

Can anyone confirm that it supports 2560*1440? I can’t see it mentioned on their website.

Perhaps, but this seems to come up often in even the Thunderbolt threads, and some of the warnings don't make it clear.

(I have a Thunderbolt 3 dock I use with Windows at my desk, and a 12" rMB for personal use, so it's not like I'm completely in the dark here regarding the differences). :D

It does look like even Caldigit's TB3 dock does allow for extended displays so, carry on...

Yup, it's always worth warning people in TB threads NOT to purchase a very similar but much less capable USB-C dock instead (because of the much lower price)
[doublepost=1502311110][/doublepost]

it's just that portrait-mode29K is not that commonly used in apps these days :rolleyes:
Score: 1 Votes (Like | Disagree)
Read All Comments