Feral interactive has announced that BioShock Remastered, a new high-definition version of the popular first-person shooter, is coming to macOS later this year to celebrate the tenth anniversary of the game's original release.

Originally developed by Irrational Games and published by 2K for PC and consoles, BioShock is set in the decaying underwater city of Rapture, a darkly imaginative gameworld inspired by Ayn Rand's philosophy of Objectivism. 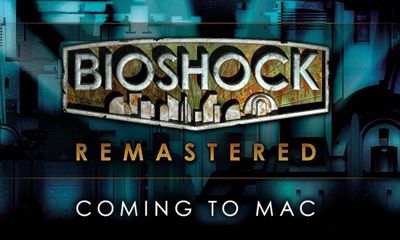 Set in an alternative 1960, BioShock Remastered plunges players into Rapture, an individualistic utopia gone badly wrong. To survive the onslaughts of the city's deranged inhabitants, players must rewrite their own genetic codes, and find creative ways to combine their terrifying new powers with devastating weapons. With a thought-provoking storyline, BioShock is at once beautiful, thrilling and frightening, and explores profound ideas about science, politics and human nature.

"The improved graphics make the most of the spectacular art direction, combining art deco design, science fiction themes, and a horror sensibility. There's never been a better time to visit Rapture."

Rather than an update to the original title, BioShock Remastered will be available as a full game from the Feral Store, Steam and the Mac App Store. System requirements and pricing will be confirmed by Feral closer to release.

Update 8/15: BioShock Remastered will launch on Steam on August 22 for $19.99, and "shortly afterwards" the game will be made available at the same price on the Mac App Store.

69Mustang
Sweet! The first Bioshock was an awesome game. As was Bioshock 2, but the original caught me off guard with it's seriously creepy atmosphere and morality play. For anyone who's never played, would you kindly pick up this game and reward Feral's dedication to Mac gaming.
Score: 9 Votes (Like | Disagree)

ILikeAllOS
Can't believe it has been 10 years already...
The first BioShock is one of the best games of all time in my opinion so I'll definitely pick this up!
Score: 5 Votes (Like | Disagree)

Beautifully crafted game, I got it for the PS4, yet with that said, it did not grab me. The game play seemed kind of redundant - even for FPS.

It's all about the story, largely the FPS element is incidental.

I remember when it first came out. Graphics were ridiculous. That opening scene and the water effect was incredible.
Score: 4 Votes (Like | Disagree)

Appleaker
I would love to see BioShock come to iOS again for this occasion as well.
Score: 4 Votes (Like | Disagree)

Swetsenegger
Let them fix the iOS version first. Was only playable for what...5 months? And then they just pulled it from the App Store. 10 euro's or something wasted.
Score: 3 Votes (Like | Disagree)

UltimaKilo
If Apple released a 4K Apple TV with 4gigs of RAM and possibly the A12 or A12X next year, they could really start to compete with the game consoles and take the Apple TV to the next level, increasing revenue.
Score: 3 Votes (Like | Disagree)
Read All Comments