Feral has announced that Sid Meier's Railroads!, the classic "tycoon" strategy game released on PC in 2006, has been updated on Mac to include full compatibility with Apple's latest macOS platform.

If you missed Sid Meier's Railroads! last time around, the game is a re-imagining of the best-selling Railroad Tycoon, which was released in 1990 for Amiga, Atari ST, and MS DOS. The game has been in dire need of a compatibility and stability update for several years, so today's announcement should come as good news for die-hard fans. 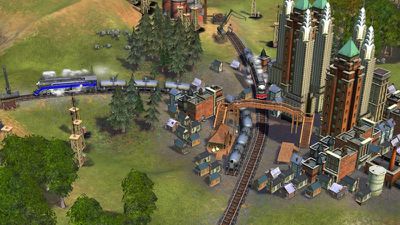 Lay track, route trains and watch the world come to life in this compelling mix of train set and business simulator. Become the ultimate railroad robber baron with the drive to shape a nation, build an empire and amass a fortune.

Spanning the history of the railroads from the steam engines of the 1830s to the bullet trains of today, Sid Meier's Railroads!, out now on Mac, is a bold re-imagining of the legendary Railroad Tycoon (1990) that launched the "tycoon" genre.

Players get to control 40 historically accurate trains across seven historical scenarios and over 150 years of American and European history. Features at the disposal of budding tycoons include corporate warfare, demand and supply, stock trading, patent bidding, and industry building. A LAN multiplayer mode also lets players sabotage their rivals and monopolize the industry.

Sid Meier's Railroads! is currently on offer at the special price of $2.49 on the Steam store until May 29. The game is also available on the Mac App Store ($17.99) and direct from Feral's online store ($9.99). Existing owners of the game should see an update in the Mac App Store.

Macaholic868
For all the money Apple charges for hardware it would be nice if they put a halfway decent GPU in one of their desktops for gaming. Their GPU's are a joke.
Score: 4 Votes (Like | Disagree)

Apple doesn't set the price, Feral does. You'd have to ask them why they didn't change the MAS price (which is still below to what you had to pay for the game on Feral's own store in the past) to match their new price.
Score: 2 Votes (Like | Disagree)

Telos101
Finally!! Credit to feral for taking the time to bother after 4+ years. Time to re-download my copy from the App Store...
Score: 2 Votes (Like | Disagree)

I guess it depends on the game, as Steam does has an "offline" mode that allows one to play a game when their is no connection available (I use this for the games I have on my Surface Pro when traveling to and from work;) it does have have to log-on to the service every few days, however...
Score: 2 Votes (Like | Disagree)
Read All Comments