Magix today announced a re-release and update for the Mac version of its popular audio editing software Sound Forge Pro, marking the first update to the software in the last three years.

Magix bought Sound Forge Pro, which was previously owned by Sony, in May of 2016 alongside much of Sony's creative software suite. Since then, Magix has been working on an update for the Mac version of the software, and it's finally ready to debut.

Sound Forge Pro Mac is designed to allow users to record and edit high-quality audio, with support for recording 32 simultaneous channels of 64-bit 192kHz audio. It features one-touch recording tools, pro-level editing workflows, and support for a range of plug-ins, all bundled into a polished interface. 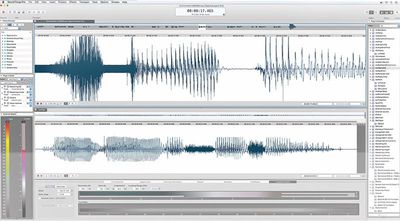 It also includes improved audio restoration, dynamic rendering for project files, preview for Mastered for iTunes versions, and support for a wider range of video formats.

Going forward, Magix also plans to introduce Sound Forge Audio Studio 12, which will debut during the third quarter of 2017.

Sound Forge Pro Mac 3 can be purchased from the Magix website for $299.99.

Note: MacRumors is an affiliate partner with Magix.

Lucamegh
No updates in 3 years? Reminds me of another Pro product...
Score: 5 Votes (Like | Disagree)

Now if only there was a DAW for Mac designed by Apple that had consistent updates, regular bug fixes, frequent additions of new features, no new versions to buy after every iteration of macOS, and had considerably better pricing

Agreed. And I have that software. ;)

Sound Forge was pretty good a decade ago, but IMO this iteration is overpriced for what you get. I like their rendering of the wave forms, but that alone won't sway me from my current app.
Score: 2 Votes (Like | Disagree)

Forgive my ignorance, I'm no audio auditor, but where can you get 64-bit audio? I've seen plenty of 24-bit (and maybe a handful of 32-bit) analogue/digital converters, but never 64-bit.

Audio is sometimes processed using 64-bit math to maintain precision and reduce aliasing. 24-bit audio can get you a slightly lower noise floor below that of 16-bit. The physics of sound makes 32-or-more-bit sample depths worthless except as an abstraction to enhance precision when you manipulate it.
Score: 2 Votes (Like | Disagree)

Boy, stories like this just remind how important it is to pick your creative applications carefully. One company's insistence on using a certain application for training/backwards compatibility purposes can leave you far behind.

Now if only there was a DAW for Mac designed by Apple that had consistent updates, regular bug fixes, frequent additions of new features, no new versions to buy after every iteration of macOS, and had considerably better pricing... if there was such a DAW, why would anybody pick anything else? ;)
Score: 2 Votes (Like | Disagree)

Boy, stories like this just remind how important it is to pick your creative applications carefully. One company's insistence on using a certain application for training/backwards compatibility purposes can leave you far behind.

Now if only there was a DAW for Mac designed by Apple that had consistent updates, regular bug fixes, frequent additions of new features, no new versions to buy after every iteration of macOS, and had considerably better pricing... if there was such a DAW, why would anybody pick anything else? ;)

Still almost uniquely so in studios.
Score: 1 Votes (Like | Disagree)
Read All Comments

Monday December 5, 2022 12:38 am PST by Tim Hardwick
UK-based tech company Nothing plans to launch a smartphone in the US to directly compete with Apple's iPhone, according to a new report out today. In an interview with CNBC, Nothing CEO Carl Pei said the startup is in "early conversations" with American cellular carriers about launching a new phone in the US, but he stopped short of naming any of the carriers or the phone model. Nothing...
Read Full Article • 152 comments