Apple CEO Tim Cook threatened to pull Uber's app from the App Store in early 2015 after discovering the ride-hailing company was secretly "fingerprinting" iPhones that used the app, it emerged on Sunday.

The claim appeared in a New York Times report profiling Uber's risk-taking chief executive Travis Kalanick, who was apparently summoned to Apple's campus for a face-to-face meeting with Cook over the app's behavior. 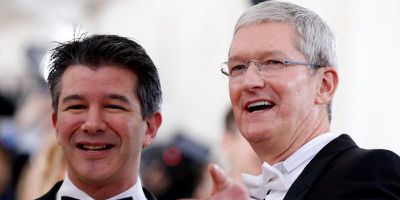 Travis Kalanick (left) and Tim Cook at a 2016 fashion gala (Image: Reuters)
According to the report, Uber was trying to prevent fraudsters from creating multiple fake accounts on the same device to collect new account bonuses, but to do this it had been recording the UUID serial numbers of iPhones so that it could identify them even after the app had been deleted and the phone wiped.

Knowing that the approach was a clear violation of Apple's app privacy guidelines, Uber implemented the tactic regardless, and even went so far as to geofence Apple's Cupertino campus so that Apple engineers using the app wouldn't see its fingerprinting behavior.

Mr. Kalanick told his engineers to "geofence" Apple’s headquarters in Cupertino, Calif., a way to digitally identify people reviewing Uber’s software in a specific location. Uber would then obfuscate its code from people within that geofenced area, essentially drawing a digital lasso around those it wanted to keep in the dark. Apple employees at its headquarters were unable to see Uber’s fingerprinting.

However, the tactic didn't go unnoticed by Apple engineers for long. Soon after the discovery was made, Tim Cook had a meeting with Kalanick and demanded that Uber stop the fingerprinting immediately, otherwise the app would be removed from the App Store. Facing the loss of millions of iPhone customers which would essentially destroy the ride-hailing business, Mr. Kalanick acceded.

This isn't the first time reports have emerged over the Uber app's dubious-sounding behavior. Concerns were raised late last year when users complained that the app appeared to track them for days or even weeks after they last used the ride-hailing service, forcing an explanation from the company.

The New York Times article offers more detail on the Uber CEO's history of controversial business tactics and can be read here.

Its a dubious company with dodgy business practices. I'm 100% all in support for the London black Cab drivers whose trade is being affected.

Here's where I am conflicted. I love the service, even as I find some of their practices deplorable, and as long as Uber continues to operate in my country, I will never use another taxi for as long as I live.

The taxi companies really have only themselves to blame for becoming so lazy and complacent and allowing themselves to be disrupted by a better, more efficient service. The uber drivers I have encountered are way more polite, knowledgeable and have a better attitude overall compared to the taxi drivers I have come across.
Score: 44 Votes (Like | Disagree)

Brookzy
It's about time Apple toughened up against the big companies in the App Store.

If you're an independent developer, your app is removed immediately at the slightest infraction.

If you're Facebook (background silent audio), Spotify (in-app purchase violation), or now Uber, you get a slap on the wrist and a meeting with the CEO.

Uber should have been booted from the App Store the moment this was discovered.
Score: 43 Votes (Like | Disagree)

steve09090
They are very lucky Cook was CEO. If Jobs was still running the show, there would have been no meeting.
Score: 39 Votes (Like | Disagree)

miscend
Its a dubious company with dodgy business practices. I'm 100% all in support for the London black Cab drivers whose trade is being affected.
Score: 21 Votes (Like | Disagree)

I have never got an Uber and don't plan on doing so. I expect they'll have some serious competition sometime soon and I will look at using a competitor. I just hear too many stories about Uber that steers me clear of them.

Try standing by the roadside with your mom in a wheelchair and see taxi after taxi whiz past you because no driver wants to get down to help. (Not me but my friend).

Try waiting at a taxi stand behind more than 30 people past midnight with no taxi in sight.

See empty taxis waiting at a stand with the "busy" signal on because they want you to call and book them.

Try arguing with taxi drivers on which route to take because they want to take the longer route in order to earn more. Or putting up with stuck up drivers who think I owe them a living, or have no idea how to travel to my destination but don't seem willing to use the maps app on their smartphone, leaving me to have to guide them there.

With maps and pre-determined fairs, that solves some of my biggest bugbears. The GPS tells the driver where to go. Because the fare is decided upfront, there is no incentive to take a longer route. In fact, it is to the driver's benefit to get me to my destination ASAP. It's a win win scenario for both of us.

The use of an app to hail a ride has all but removed any uncertainty from the equation. I can call an Uber from home, then slowly walk down just as my ride arrives. Waiting by the roadside and praying that a taxi comes your way now seems so barbaric by comparison.

Uber is far from perfect, but the taxi companies are no angels themselves.
Score: 18 Votes (Like | Disagree)

KohPhiPhi
What can I say... I love Uber!

Affordable, quick, polite, secure, convenient... as long as there is Uber, I wont take another taxi in my life. Why pay more for an inferior service? Perhaps taxis shouldnt have slept complaciently in their monopoly for so long... a better competitor came in and took their lunch. God bless the free market.
Score: 12 Votes (Like | Disagree)
Read All Comments