Ahead of the NAB media trade show, which kicks off on April 22, Adobe today unveiled updates to several of its Creative Cloud apps, including Premiere Pro, After Effects, Character Animator, and Audition.

Better integration between Premiere Pro, After Effects, and Audition is a key theme in today's updates, as are more powerful Dynamic Link collaborative tools to make group projects easier.

Premiere Pro is gaining a new Essential Graphics Panel, designed to allow users to add titles and motion graphics to videos using controls similar to those found in Photoshop and Illustrator. Included in the Essential Graphics Panel is a Type tool for adding text, which offers customization options for font, size, color, and blending mode. 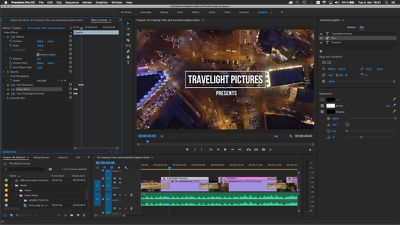 Adobe After Effects CC is also gaining the Essential Graphics panel to allow for the creation of Motion Graphics templates for Premiere Pro, and Adobe is introducing a new Camera Shake Deblur feature.

Camera Shake Deblur is designed to cut down on unwanted motion blur artifacts and according to Adobe, it's able to salvage otherwise unusable shots when combined with the Warp Stabilizer VFX. It analyzes frames on either side of the blurry frame and merges the sharper content with the blurry content for a crisper image.

Premiere Pro's integrated Lumetri Scopes are expanding to After Effects to make it easier for After Effects users to accurately adjust color using Vectorscopes, Histogram, Parade, and Waveform to evaluate video, and the After Effects update introduces new GPU-accelerated effects including Fractal Noise, Levels, and Fast Box Blur.