April is Autism Acceptance Month, and Apple plans to mark the occasion in several ways, including a dedicated section in the App Store and retail field trips.

According to Steven Aquino, a journalist who covers accessibility topics, Apple will offer field trips to retail stores that will host music events designed to include children with disabilities.

Kids will be able to participate in the events using the Skoogmusic Skoog 2.0 Tactile Musical Interface, one of the many accessibility-oriented accessories Apple sells in its online store. Skoog is a tactile cube that lets children with disabilities control sound through touch.


Along with special Apple Store events, Apple has created an Autism Acceptance App Store section that includes dozens of important accessibility apps organized into sections like Apps for Every Day, Apps for Learning, Books, Podcasts, and iTunes U courses. 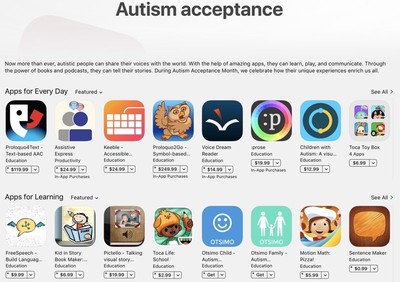 Accessibility has always been hugely important to Apple, and the company has aimed to make its devices accessible for everyone, with in-depth accessibility settings to meet a range of needs. Back in October, Apple launched a new Accessibility website that highlights accessibility features across all of its products.

that be me
As an Apple fan with autism, I wonder if they'll have any events for adults. I think this is a great idea overall.
Score: 9 Votes (Like | Disagree)

WarHeadz
I love that Apple is so socially active. Some people say they should just stick to business, but I disagree.
Score: 9 Votes (Like | Disagree)

brendu
Interesting they call it autism acceptance when I've always heard of it as autism awareness month. As a special education teacher I like "autism acceptance" as much as awareness. Good for Apple for spreading the word.
Score: 8 Votes (Like | Disagree)

harriska2
There is an ignore option! Click on the user name then click on the ignore link. It works!

Apple has definitely helped my 21 year old son with autism. When we first got it in 2000, we didn't realize how beneficial it would become. Reading books and texts on the ipad is quicker with word lookups. You can have it read anything to you. He uses it to take pictures of the whiteboard, experiments, and record lectures. It ties to his $100 used iphone 5s with icloud so that he can maintain his calendar of homwork due, dental appointments and contact info. He emails and facetimes me. He emails his instructors with questions, something he never used to do. He has a macbook for heftier assigments but he claims the ipad is "an extension of my arm." His communication skills used to be non existent - even neglecting to ask to go out for dinner or telling us he was leaving. Now his communication is very regular because his devices work together and they are easy for him to use and learn. He uses a $10 iwireless plan and it works just fine. I have to say the apple devices have been worth every penny, especially the sturdy ipads that he has dropped on tile foors multiple times.
Score: 5 Votes (Like | Disagree)

Oh please. You think the hardware is special or that its designed for these people. Wrong! There is zero difference between an iPad, Android Tablet, or Windows Surface. It just happened that the most software is available on Apple's stuff. But it's not exclusive. While the iPad is helping people....there is nothing special about the iPad that makes it anymore useful than competing platforms. There are PLENTY of classrooms and homes using software for non-Apple devices that is helping people just as much. The other tech companies just don't showcase that sort of thing as much as Apple. Apple wants to shove it's so called progressive values down your throat so you get that warm and fuzzy feeling when you spend $500 on a watch and $900 on a phone. Your crazy defense is proof of that. You are brainwashed into thinking the iPad is the only magical device that can help people. Well....you are wrong. And Apple makes these devices with accessibility options (very few of them) simply to increase it's sales. But hey, keep defending Apple and pushing it's progressive image....it helps Tim fill his Yacht with gas and Dr. Dre buy off the cops for all the woman he beats and drugs he probably buys.

Apple has accessibility features others don't have or only recently introduced. You make a ton of assumptions too. I never said only Apple makes devices that help people. If you really think Apple is such a horrible company for having progressive values, then go buy something else. I'm not politically liberal but im perfectly capable of recognizing the work that has been done to make it easier for people to live their lives. And yes, Apple has the absolute best mainstream hardware and software for accessibility needs. Also, would supporting google or miscosoft be any better for me? How would it be any different, lining their executives pockets with my money?
Score: 5 Votes (Like | Disagree)

page3
As an aside, here in the UK Apple run a load of summer "code clubs". I'm sure they do the same (probably more) in the US. Anyway, last year we took our 8 year old (autistic) son to one. He'd never been to anything like it before, and we'd never thought of attempting to take him to something like this. He'd been experimenting with Xcode for a few months as he'd outgrown Swift Playgrounds. He was really keen, but socially anxious.

Apple were brilliant. I contacted the store in advance - one of the smallest in the UK. They sent photos and tshirt in advance so he could acclimatise. Over the three days nothing was too much trouble. He was lent noise-cancelling headphones and when a trigger caused a meltdown they allowed us to go "backstage" where it was quiet and he could calm down. We were made to feel welcome rather than a burden.

A year later I'm still grateful to the staff at the Southampton Apple Store.

Apple "gets" autism and I applaud their efforts.
Score: 4 Votes (Like | Disagree)
Read All Comments

Wednesday July 8, 2020 3:14 pm PDT by Juli Clover
Apple is working on Macs that use its custom Apple-designed Apple Silicon chips instead of Intel chips, but Apple has committed to continuing to support Thunderbolt, reports The Verge. In a statement, an Apple spokesperson said that Apple's upcoming machines will offer support for Intel's Thunderbolt USB-C standard. "Over a decade ago, Apple partnered with Intel to design and develop...
Read Full Article • 209 comments