After a period of testing earlier in the year, Facebook recently began rolling out a new tourism feature called "City Guides" to its iOS app for a number of users (via The Next Web). Located in the Explore tab of the app -- similar to the recently expanded Weather feature -- City Guides presents users with a list of cities visited by their friends and provides recommendations on places to eat, visit, and stay on a future trip.

After tapping on a city, the app provides a list of friends who have been to the location along with the places they checked into while they were there. So if you're looking for restaurant or hotel suggestions, it's easy to bookmark the hotspots right in the app and message a friend to see what they think about it. Further down the page is a "Places The Locals Go" section that lists popular spots based on each location's Facebook page rating. 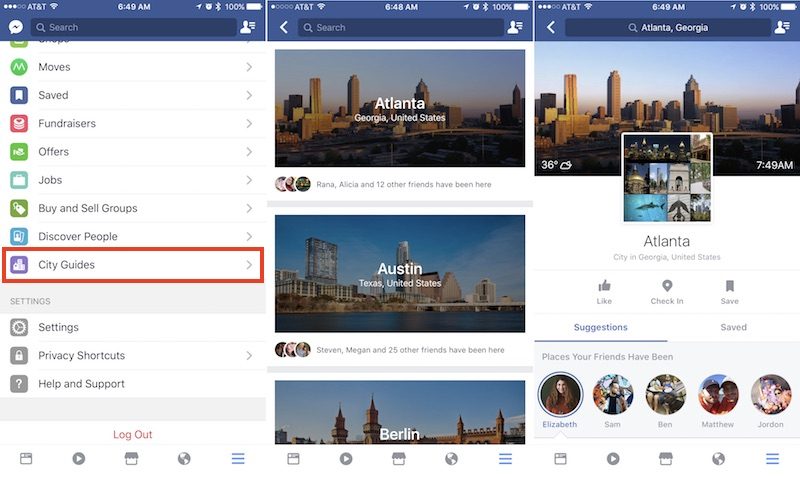 City Guides also provide insight into upcoming events in each city to help plan a trip, as well as giving tourists a scrollable list of popular attractions to stop by when they arrive. Users will be able to jump into City Guides directly from the home screen as well, thanks to a redirection prompt placed under city check-in posts of their friends and family.

While Facebook is dedicated to bolstering its video content across many devices, the company is consistently adding minor updates like City Guides to its mobile app, even introducing a way for users to apply for a job without leaving Facebook.

The City Guides feature is said to be available for a small group of users at first before a wider rollout. Facebook is available on the iOS App Store for free. [Direct Link]

merkinmuffley
I feel left out since I stopped being a Facebook product.
Rating: 6 Votes

jerdo
Sadly, I don't have any friends.
Rating: 5 Votes

I feel left out since I stopped being a Facebook product.

So it is kind of like integrating a friends only version of Trip Advisor.


Welcome to the club, Facebook! (and Google, by the way, who did something similar earlier).

We make an app called "Pyfl" for Places Your Friends Like, that does exactly that. The difference is that it's more purposeful (eg. you add a place because you really want to add it, not because you liked it some day).

You can connect with Facebook if you want to find friends quickly, but you don't have to!

You can download it here ('http://l.getpyfl.com/pyfl1') if you want to give it a try.
Rating: 1 Votes

chr1s60
So it is kind of like integrating a friends only version of Trip Advisor.
Rating: 1 Votes
[ Read All Comments ]