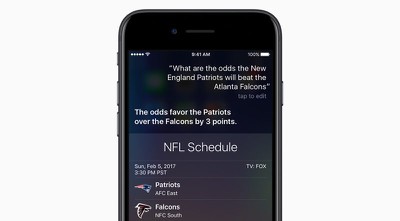 Apple also highlights other ways Siri can be used on Super Bowl Sunday, for everything from team and player statistics to reminders to purchase snacks.

Whether you're at home, at a local sports bar or at a friend's party, Siri is available everywhere you are and provides even more football insights including team rosters, player comparisons, historical stats, season records and more. Siri can also help with game day planning by telling fans where to watch the game, who's performing during the halftime show and reminding them to pick up snacks as they head out the door.

A long list of example questions Siri can answer are included in Apple's announcement, such as "What is the Patriots record?" or "Who has more rushing yards this season, Tom Brady or Matt Ryan?" Super Bowl fans may want to check it out to find new ways to engage with Siri.

The Super Bowl will take place on Sunday, February 5 at 3:30 p.m. Pacific Time. The New England Patriots will be facing off against the Atlanta Falcons at NRG Stadium in Houston, Texas.

mccaffertee
GREAT IDEA!!! Too bad Siri never understands what I am asking.
Score: 12 Votes (Like | Disagree)

Targets R Us
The fact that Apple had to add specific capabilities to do these Super Bowl type of related queries simply points out what's wrong with Siri capabilities and why it's so far behind.

Relentless Power
That's creative to implement Siri for the Super Bowl. Now if I actually liked either team playing in the Super Bowl.
Score: 5 Votes (Like | Disagree)

Hey Siri - Who was accused and found guilty of piping crowd noise into their stadium to give the Falcons and Matt Ryan an advantage?

Yeah, that was us.:oops: Not our greatest moment. Not our worst either... not by a long shot. To be fair, half of us are three sheets to the wind by kickoff. Tailgating is a sport unto itself in the south.

If someone is screwing around with Siri at my SB party, they will be relegated to the small TV in the garage.

Hé Alexa or Viv - can you assist Siri in some structural AI instead of singular per-event, prefab non-intelli fact checking ?
Score: 3 Votes (Like | Disagree)
Read All Comments