Akitio has announced the release of the its Thunder3 Quad Mini, a 2.5" four-bay Thunderbolt 3 external storage solution for the latest MacBook Pro. 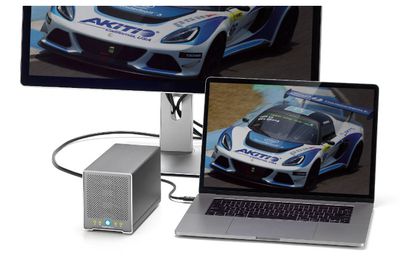 The aluminum storage device has removable trays designed to house up to four 2.5" SATA SSDs or hard drives purchased separately. The device is equipped with two Thunderbolt 3 ports—the first one connects to the MacBook Pro, and the second one can be used to connect or daisy chain Thunderbolt 3 or USB-C peripherals.

A dedicated DisplayPort 1.2 video output provides connectivity to the 4K displays at 60Hz, while the device supports Power Delivery up to 15W to notebooks that support charging from a 5V/3A power source. 15W is hardly sufficient wattage for the latest MacBook Pro, which fully charges at up to 85W with Apple's own charger.

Akitio said the Thunder3 Quad Mini will be available in March for $329 alongside five other Thunderbolt 3 storage devices it sells.

This Thunder3 Quad Mini uses RAID 0, which essentially combines the four drives into one, but there is a risk of data loss as there is no redundancy.

Imagine you are storing a song on your computer, but instead of bits and bytes, there are little people in there that sing it back to you. You don't want to lose your song (singers quit all the time), and let's also pretend you want it sung as fast as possible. What do you do? You configure RAID.


* RAID-0: 2 or more people sing alternate words in the song. This is faster because they can breathe, turn the page, etc. while they're waiting for their next turn. If one of them quits, the song will be ruined forever, though. Hopefully you have a backup band!
* RAID-1: 2 or more people sing the song at the same time. If one of them quits, the song will still be sung because everyone else knows all the words, too. You can hire a new singer who will quickly learn the song from everyone else.
* RAID-5: 3 or more people sing alternate words, like RAID-0. But this time, every word in the song has exactly one backup singer. So it's faster and if one quits, someone else can jump in and cover the missing parts. It will take some time to get a new singer up to speed, though, and until the new singer is caught up, if you lose another one you will lose the song!

Replace all references to "singers/bands" and "words" with "hard drives" and "blocks of data", respectively, and you've got RAID. There are more types of RAID but in the past 30 years or so these have been the most popular types. Why, you might ask, doesn't everyone just do RAID 5? Well, singers cost money, and it slows them down just a bit to learn each other's lines.

any details on speeds WITHOUT being in a RAID mode for SSDs? assuming it does support JBOD and would show as 4 separate drives if setup for that.

lincolntran
The potentials of the new MacBook Pro are starting to show.

bsbeamer
any details on speeds WITHOUT being in a RAID mode for SSDs? assuming it does support JBOD and would show as 4 separate drives if setup for that.
Score: 1 Votes (Like | Disagree)

This Thunder3 Quad Mini uses RAID 0, which essentially combines the four drives into one, but there is a risk of data loss as there is no redundancy.

That is one of the best layman's explanations for RAID I have ever read.
Score: 1 Votes (Like | Disagree)
Read All Comments