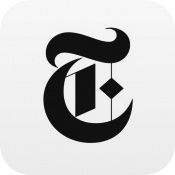 According to Apple, the company was forced to remove both the English-language and Chinese-language news apps after being informed they were in "violation of local regulations."

"We have been informed that the app is in violation of local regulations," Fred Sainz, an Apple spokesman, said of the Times apps. "As a result, the app must be taken down off the China App Store. When this situation changes, the App Store will once again offer the New York Times app for download in China."

News apps from other publications such as The Financial Times and The Wall Street Journal remain in the Chinese App Store. The New York Times app was likely removed due to a long-standing ban in China - the site has been blocked since 2012.

Apple has not provided specific information on the local regulations the apps violated, and The New York Times has asked Apple to reconsider its decision.

"The request by the Chinese authorities to remove our apps is part of their wider attempt to prevent readers in China from accessing independent news coverage by The New York Times of that country, coverage which is no different from the journalism we do about every other country in the world," Ms. Murphy said in a statement.

The New York Times believes the request may have been made under Provisions on the Administration of Internet Application Informations Services regulations introduced in June of 2016. Those regulations prevent apps from publishing prohibited information and "endangering national security, disrupting social order and violating the legitimate rights and interests of others."

Apple has faced censoring in China multiple times in the past, most notably being forced to shut down iTunes Movies and the iBooks Store following the release of controversial independent movie Ten Years.

Censorship at its finest. I mean, what can you expect from a country like China.


Has the NYT app made 100 posts on Macrumors? They wouldn't be allowed to comment on here either ;)

It's a false equivalence to compare a tech forum's anti-trolling policy with a nation state's censorship of a general news service of course, but the point is let's not pretend that China is the only place where censorship occurs, even if it seems to be more egregious there to those in the West.

Here in the UK there are apparently things called D-notices that get supposedly get issued to news stations when the government wants something kept quiet.

In the US, we've seen stories about gag orders concerning matters surrounding encryption, and it would be reasonable to assume there are plenty more we haven't heard about, for obvious reasons.

All I'm saying is, to everyone, maybe let's not make it such a binary 'we good, they bad' thing. I'm not in favour of any of this kind of political censorship (and like you, I'm not saying it's that surprising of China given their track record), but likely no country on Earth is completely innocent of doing it to some degree.
Rating: 10 Votes

garirry
Censorship at its finest. I mean, what can you expect from a country like China.
Rating: 9 Votes

jimbobb24
This lends itself to endless humor but mostly shame on Chinese govt. The NYT is a respected publication and this just illustrates the ongoing suppression of free speech.
Rating: 6 Votes

alex2792
I guess Chinese are not huge fans of Pravda, I mean NY Times.
Rating: 6 Votes

If you agree with something they did, perhaps it's time for you to do some self-reflection.

I guess Chinese are not huge fans of Pravda, I mean NY Times.

It's telling that your first reaction is to agree with an act of censorship by an unelected government.
[doublepost=1483565046][/doublepost]

I'm pretty sure Fox News is behind this.

I'm sure Fox News is appalled by this. The Fox news desk upholds traditional journalistic standards, same as the NY Times.
Rating: 4 Votes

samcraig
The ban is clearly in response to the fact that the website has been blocked since 2012 there. I'm not in support of this - but obviously if the site is banned and has been since 2012, it shouldn't be a surprise that the app was asked to be removed.
Rating: 4 Votes

I feel a little bad for Apple.

REALLY ... a company who cozies up to a communist dictatorship with a deplorable human rights record?
Rating: 4 Votes

You get your news from Breitbart?
Rating: 4 Votes

citizenzen
I feel for all the Chinese people who appreciate good crossword puzzles.
Rating: 3 Votes
[ Read All Comments ]