Apple has updated the iCloud beta website with a new Photos section that includes improved navigation tools similar to the native Photos app on macOS Sierra. As discovered by MacMagazine [Google Translate], the Photos section in the beta site now includes a sidebar for navigation, which displays all of a user's albums so it's easier to jump between photo collections. 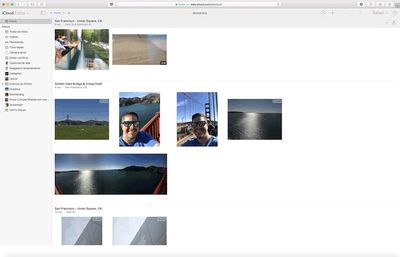 In the current iteration of iCloud.com albums are found in a tab bar at the top of the Photos part of the website, next to a user's moments. With the update, users are also able to choose multiple photos from the new album select toolbar "and use the action buttons in the upper right corner to add, share, download, or remove albums."

Within each album, when a specific photo is clicked on, users will be presented with a scrollable thumbnail view of the entire album's contents, providing further ease of navigating through large photo collections.

The iCloud.com updates are strictly navigational improvements, with no addition of the new macOS Sierra Photos features like Faces and Memories. It's unclear how long it will take for the new changes to launch on a broader scale after debuting on the iCloud.com beta site.

Vertigo50
So someone at Apple woke up and realized they've barely touched the Photos service in forever and that Google Photos is eating their lunch. So now they will pool resources and work on this while a bunch of other projects suffer. The cycle continues.
Score: 3 Votes (Like | Disagree)

2457282
Well this is a slightly positive move by Apple. Now let's really move -
1. bring faces to the web
2. sync face tags across platforms - the lack of this is a serious issue for me
3. fix the pixelmator addon bug - in macOS, using the addon inside of Photos, crashes Photos
4. put the repair tool on iOS
5. allow me to manage memories consistently across platforms - can't right now and it isn't very intuitive on any platform
7. add a dedupe feature
Score: 3 Votes (Like | Disagree)

Maybe a year or two ago that would have been a justification for paying. But now that Google Photos backs up every photo and video you have for the price of $0.00, Apple must compete. You can argue all you want about how Google is giving you their service in return for your data, but that shouldn't stop Apple from outdoing them. You can also argue that iCloud backs up more than photos and videos, but realistically those are what fill up the 5Gb free storage we all get. I have since turned off photo backups for iCloud, and I have no issues with iCloud filling up. But Apple should realize that they're losing people to Google Photos and take action.

A lot of people are being fooled by Google Photo's "free unlimited storage" when the truth is, this is not a backup AT ALL.

Google Photos will recompress your photos into smaller versions when you use the free tier. It is NOT a backup because your data isn't being backed up, only an approximation of it. I feel sorry for people who "feel safe" that their entire photo collection is "backed up" on Google Photos; if they lose their original, all they'll have is slightly lower quality recompressed copies.

Flickr, to their credit, DOES store bit-perfect originals, but you have to deal with ads everywhere.

There's no free lunch and that includes Google Photos. That said I do wish they'd lower the cost of cloud storage, but that's not something we can control. All the companies charge more or less the same amount.
Score: 2 Votes (Like | Disagree)

With native Photos apps on Mac, iPad and iPhone, I wonder how much use the web app actually gets. I guess it's useful if you're away from your devices, or maybe for creating sharing links?

There's a lot of people who have an iPhone but use Windows on their computers. The website is the only way to *manage* your photo collection from a Windows PC.

Yes, Apple created a Windows app that lets you access your library, but it's read-only (you can't make changes to your iCloud photo library from it), and is mostly designed as a backup tool.
Score: 2 Votes (Like | Disagree)

I'd love to edit the time and geotag of some photos from the web app too though.

Take a guess why Photos is so oversimplified and Aperture is binned.

Advanced functionality is an endangered species in the Apple ecosystem, and no, it has NOT always been like that.

I'm worrying about iTunes versatility... It already has taken some hits, take a look at Get info for example...

Sunday May 15, 2022 6:14 am PDT by Sami Fathi
iOS 16 will include new ways of interacting with the system and some "fresh Apple apps," Bloomberg's Mark Gurman has said, offering some more detail on what Apple has in store for the upcoming release of iOS and iPadOS set to be announced in a few weeks at WWDC. In the latest edition of his Power On newsletter, Gurman wrote that while iOS 16 is not likely to introduce a major face-lift to...
Read Full Article • 180 comments