Sony today announced the upcoming launch of a new DualShock 4 USB Wireless Adapter, which will allow Mac and PC users to wirelessly connect a DualShock 4 controller to their machines. 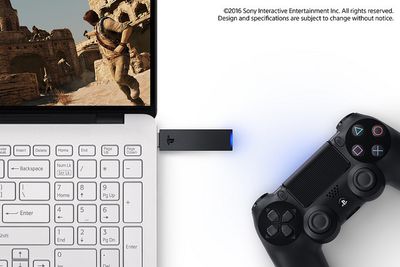 Currently, the DualShock 4 controller can connect to Macs via Bluetooth or a USB cable, but the adapter will allow for access to all controller functions. The adapter can also be used for PS4 Remote Play, which allows games to be streamed from the PS4 to a Mac or PC.

Sony has also announced imminent PlayStation Now availability for Windows PCs, which will allow PCs to play PS3 exclusive titles. PlayStation Now will be launching soon in Europe and a wider release in the United States will follow. Sony says it is "evaluating" Mac support for PS Now, but has nothing to announce at this time.

Sony will begin selling the DualShock 4 USB Wireless Adapter in early September for $24.99.

People doesn't play games with intensive graphics anymore, modern games are a lot lighter these days and more fun and interactive, Nintendo knows it! you probably still playing those classics games like Infinity Blade, it was cool back then but now we need move on

I fear you're a little out of touch. Resource intensive games, pushing the current limits of graphics technology, are more common place and popular now than they ever were.
Score: 8 Votes (Like | Disagree)

2010mini
Wish this was compatible with the Apple TV.
Score: 7 Votes (Like | Disagree)

0098386
I was surprised at how well Playstation Now ran, not only on my PS4 (wired to a BT Infinity router) but also wireless with the Vita. And also how well Remote Play runs on my iMac. It's all pretty good in terms of latency and quality.
Score: 5 Votes (Like | Disagree)

Yes and a computer does more things at once..you can edit a 4K video while playing video games on your MacBook, and you don't even need to use CDs anymore

If you can edit a 4K video whilst playing video games on your MacBook, I'd be surprised if you're playing anything beyond Chess.

Ease off on the hyperbole. Both devices are optimised for different things.
Score: 5 Votes (Like | Disagree)

Yes but the games for Mac are optimised slightly better!
Probably, but atleast we can do more things than once, MacBook would probably be a lot faster than is now if those were made by Apple, you can't blame Apple for Intel's failures, but Apple did manage to make the world's thinnest laptop while maintaining a decent performance, can you even imagine how many breakthrough technologies they used to make that laptop so thin? a lot!

If Steve Jobs was alive he will be happy about what Tim Cook had accomplished and probably a little jealous :)

Wait, what? We're talking about a PS4. A modern games console will smoke a Mac for games performance. That's why it's a device designed to solely play games. Am I missing something you're trying to say? :confused:
Score: 4 Votes (Like | Disagree)

Why buy a PS4 when you have a Mac?

I'm surprised you're hearing this for the first time, but a PS4 is a games console. A Mac is a computer.
Score: 3 Votes (Like | Disagree)
Read All Comments