Moog Music has brought its legendary $10,000 Model 15 analog synthesizer to iOS with the launch of the $30 Model 15 app.

The digital version of the analog modular synth is a one-to-one recreation of the iconic Model 15 from 1973, with a scalable interface that features gestural support for oscillators, low/high-pass filters, a looping recorder, full MIDI integration, ping-pong delay module, and numerous patch cables among the various knobs and switches. 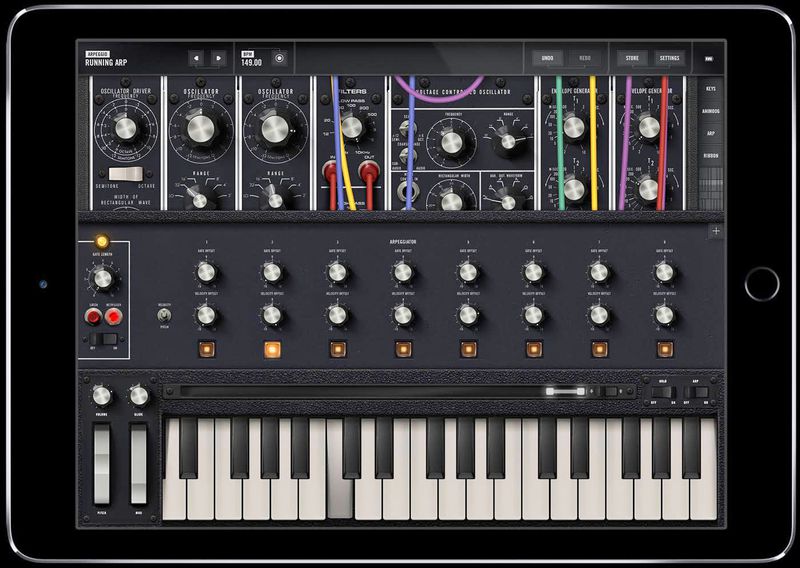 The Model 15 ships with over 160 unique presets, a 1150 ribbon controller, 8-step sequencing arpeggiator, as well as the award-winning Animoog keyboard with 22 built-in scales and polyphonic modulation capabilities.

The Model 15 app supports Inter-App Audio and external MIDI controllers, and comes with Apple Pencil support for iPad Pro owners. The app was built using Apple's Metal low-level graphics optimization API to ensure smooth scrolling and a responsive touch interface throughout. As such, it only works on 64-bit devices running iOS 9.3, including the iPhone 5s and iPad Air or later.

I really want this! $30 is quite expensive for an app but it's sounds amazing.

Wouldn't a synthesizer from 1973 be bad? How could it keep up with today's music and create beats in genres like dubstep or trap?


It's a classic synth, which accurately replicates the sound from the $10,000 hardware model. Plug this thing into an amp and it'll sound incredible. It's definitely not designed for dubstep and stuff like that.

I'd really recommend you check out a few Moog synth videos on YouTube.
Rating: 7 Votes


Maybe. But it certainly didn't get any better than the stuff they made 40 years ago.
Rating: 7 Votes

Or just about twice the price of a decent set of guitar strings.

You don't even have to be an aspiring "semi-pro" musician to be willing to spend this kind of money to get a sound, no less the range of sounds possible from synths of that era. Compared to the days when you had to buy an entire instrument to get just one sound (as John Oliver might say, "I'm thinking of you, Clavinet!")?

People spent many times $30 just buying patch cords for Model 15s, Arp 2600s, and other analog synths of the day. Synth patches could resemble a knitter's yarn bag after a litter of kittens got into it. And the sounds those synths made were very hard to duplicate, since the circuitry was temperature sensitive, carbon potentiometers were nearly impossible to re-set with any kind of precision, you might fail to document a particular pot or patch cord... so many variables! A composer friend of mine bought an E-mu Emulator (digital sampling keyboard - in the $8,000-$10,000 range) just so he could preserve/reuse his Arp 2600 setups. The digital synths' ability to store presets was a revolutionary advance.

Wouldn't a synthesizer from 1973 be bad? How could it keep up with today's music and create beats in genres like dubstep or trap?

If it can't do dubstep or trap, that's probably not a huge loss...
Rating: 6 Votes

It's a classic synth, which accurately replicates the sound from the $10,000 hardware model. Plug this thing into an amp and it'll sound incredible. It's definitely not designed for dubstep and stuff like that.

I'd really recommend you check out a few Moog synth videos on YouTube.


There's also an excellent documentary on Netflix called "I Dream Of Wires" that covers the history of modular synthesizers. Definitely worth a watch if you're interested in electronic music.
Rating: 5 Votes

Actually, adjusted for inflation, it would cost $53,600 in today's dollars. You would have had to be a Wendy Carlos, Keith Emerson, Rick Wakeman, or music school to afford the original in 1973.

As someone who was a young teenager in 1973, it amuses me that $30 is considered expensive for an app like this. It's the cost of dinner, drinks, and tip at a not-very-expensive restaurant. Prior to iOS apps, only the simplest of programs could be had for $30 on a desktop OS. But now I'm sounding like an old fart: "Back in my day, sonny, we paid $2 million for a Cray 1 computer and were grateful to have it!"
Rating: 4 Votes

rubenrp
Just picked this one up - it's well worth the $30. The interface is quite good - the demo video does not show all of the options. For instance, rotating it on a regular iPad and minimizing/hiding the keyboard makes the modules section directly accessible - little to no scrolling needed. Similarly, the patch cords can be adjusted by simply double-tapping on the appropriate inputs/outputs - no need for the complex scroll-drag shown in the video. I haven't hooked it up yet to an external Midi keyboard, but I've already had a lot of fun trying out some simple ideas on the iPad. And the sound is amazing - it truly recreates the "personality" of the Model 15.
Rating: 4 Votes

mw360
The skeuomorphism! It's beautiful!

I really want this! $30 is quite expensive for an app but it's sounds amazing.


$30 is an absolute waste of money. But I paid it anyway. I love it! There's a couple of patches on there that make sounds I didn't think an iPad was capable of.
Rating: 3 Votes
[ Read All Comments ]