Teen interest in Apple's iPhone continues to grow, according to data gathered by Piper Jaffray analyst Gene Munster in the latest semiannual teen survey. 69 percent of teens surveyed own iPhones, up from 67 percent in the Fall 2015 survey. 75 percent of teens queried expect their next device to be an iPhone, up one percent from the previous survey. 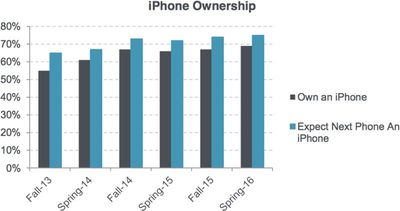 We would expect the Apple Watch to maintain market share close to that of iPhone, but don't expect major changes in interest until stronger use cases emerge. We continue to view CY17 as the potential breakout year for Apple Watch.

When considering the full range of wearables, the Fitbit was the most preferred brand among teens, with 72 percent surveyed choosing the Fitbit. Nike came in second at 12 percent, and interest in the Apple Watch was at six percent. Wearables are growing in popularity, with 22 percent of females and 18 percent of males surveyed owning a fitness tracker, up from 14 and 12 percent, respectively, in the previous survey.

Interest in the iPad has grown among teens who plan to buy a tablet, however, which may be attributed to the launch of Apple's 9.7-inch and 12.9-inch iPad Pros. When surveyed, 63 percent of the 13 percent of non-tablet owners planning to buy one said they would choose an iPad, up from 58 percent in the fall.

iPhone adoption among teens may see growth in the fall, with the release of the iPhone 7, a major upgrade that's expected to bring significant new features like a dual camera on the Plus model and minor design refinements. Apple Watch growth may remain stagnant, as recent rumors have suggested the second-generation update will be relatively minor in scale. Interest in the iPad may see a continuing decline as Apple does not have any significant product changes in the works, having just released the iPad Pro models in late 2015 and early 2016.

Teens and kids owning iPhones is exactly what puts me off owning one. The iPhone seems to be more of a fashion statement than anything else these days.

I come to MR just for posts like these.

Only through MR does one gain such intelligence.
Score: 15 Votes (Like | Disagree)

Besides being cheaper, does fitbit really do anything my Apple Watch cannot do?

Last for a week without a charge lol.
Score: 10 Votes (Like | Disagree)

CFreymarc
Data is partially useful. When you survey like this, knowledge of family income is essential to make use of the survey data. This looks like a group of upper middle class to upper class group of teens with such a high iPhone preference. I'm sure the number would be much lower if the family income was lower.
Score: 8 Votes (Like | Disagree)

Altis
It's almost exclusively due to herd mentality -- people at that age especially want to fit in and not be missing out (making sure they have the same platform for iMessage, apps, etc).
Score: 8 Votes (Like | Disagree)

rp2011
Well the dust has settled and kids are not stupid. The only Android phones anyone should consider and anyone in the tech media should recommend is a high-end Samsung device. And really, any honest gadget blog would be remiss not point customers to the SE or the iPhone rather than any Android device. Owning an iPhone you are assured a quality device and more importantly, one that will be backed up with updates and features by Apple, unlike Android where you are instantly abandoned once they get your sale.

As a former Android user who didn't know any better, once you own an iPhone you feel stupid for ever owning anything else. And it's just wrong and sad how gadget sites don't do a better service to their readers in steering them away from the Android mess and their malware. Or do a better job at informing their readers that once you buy a cheap Android device, support is basically nil after suckering you into buying one. The echo-chamber of dopey 20-something gadget blog writers still site "customization" as what separates iOS from android as if were something beyond the useless tacky widgets that they call "customization." As if it's really is a feature of note that somehow balances out the platforms. SMH
Score: 5 Votes (Like | Disagree)

vertsix
Out of the thousands of people I've seen in the past year, only like 7 have had Apple Watches or other fitness bands.

A friend of mine got an Apple Watch and I asked him why, he said "I don't know."
Score: 5 Votes (Like | Disagree)
Read All Comments