Audiobooks Purchased From Apple Can Now Be Re-Downloaded Through iCloud

Apple recently updated its policy on audiobooks, allowing customers who have purchased audiobooks directly from Apple to re-download them using iTunes in the Cloud through iBooks on iOS devices or through iTunes on a Mac or PC. Audiobooks are now listed in a customer's iBooks purchase history and can be re-downloaded just like standard e-books.

According to a support document on downloading past purchases, the change was made on March 3. Prior to that date, audiobooks could not be re-downloaded through iCloud and were only available if they were included in a backup made on a Mac or PC. 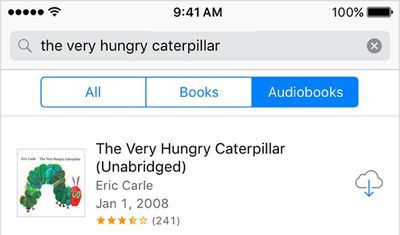 A second support document outlining which iTunes purchases can be downloaded again by country has also been updated to reflect the change. In 22 countries, including the United States, Australia, New Zealand, Japan, Canada, and much of Europe, purchased audiobooks can be accessed at any time through a user's Purchased history.

In iOS 9.3, audiobooks are also available to be automatically downloaded to all iOS devices when purchased. In the Settings app under iTunes & App Store, "Books & Audiobooks" is now an option under Automatic Downloads. Previously, this section listed only books, leaving out audiobooks.

iOS 9.3 will also streamline the iBooks "Purchased" tab with deeper organizational options that sort books by category and it enables Family Sharing for audiobooks.

Apple has been gradually improving support for its selection of audiobooks. In iOS 8.4, audiobooks became available to purchase and listen to through the iBooks app, making them much more accessible. Prior to that date, audiobooks had to be purchased through the iTunes store and listened to using the Music app.

Audiobooks can be re-downloaded on all iOS devices immediately. Automatic Downloads of audiobooks will be enabled with iOS 9.3, set to be released to the public in the near future.

I also am not sure how a picture-driven story would translate to audiobook format.

I cannot get over my excitement of seeing that book cover though. For real.
Score: 10 Votes (Like | Disagree)

Aldaris
About time!!! This is great!
Score: 5 Votes (Like | Disagree)

Jeaz
Great news. Been waiting for this for quite some time and one reason I've not bought my Audiobooks from iTunes.
Score: 4 Votes (Like | Disagree)

This is why I still am not in love with cloud (only) services. Because this should have been available on Day 1. If you buy the content, you should be able to access it easily.

I'm staggered that it has taken so long to bring such basic functionality to iBooks.

entropi
Well, since they took away the audiobook features in iOS 6 when they made iOS 7 and I was dumb enough to upgrade I have now learned my lesson and buys my books from other sources. I bet Apple will change everything again soon. I sometimes feel like I have let Apple fool me enough times already.
Score: 3 Votes (Like | Disagree)
Read All Comments