An upcoming musical comedy that highlights the rivalry between Apple co-founder Steve Jobs and Microsoft co-founder Bill Gates is set to debut on Broadway on March 31, 2016. Called Nerds, the musical will chronicle the rise of Jobs and Gates and the competition between their two companies.

According to Variety, the musical will feature "an array of tech" like onstage holograms, projection mapping, and an interactive in-show app that lets audience members interact with one another and help choose the show's ending each night. 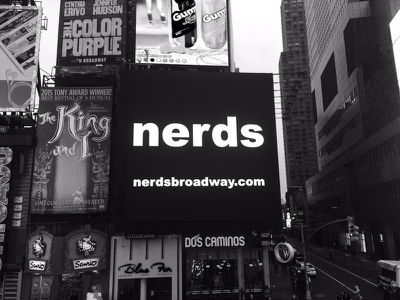 "We're thrilled to add a jolt of comedy to this already astounding theater season, with this hilarious tale of the Founding Fathers of Tech, from a creative team stacked with new voices," said producer Carl Levin. "While fine-tuning and re-coding the show for this exciting launch, we've also been exploring innovative ways to enhance the 'user experience' inside the theater, for a uniquely entertaining event - compatible for Broadway audiences of all generations."

The cast for Nerds has not yet been announced, but the play was written by Jordan Allen-Dutton and Erik Weiner, both of whom previously wrote for cartoon series Robot Chicken. Casey Hushion directs, while music was written by Hal Goldberg.

Previews for the show start on March 31, 2016, and its official opening date is April 21, 2016. Tickets are available from the Nerds website with prices that start at $39.

chucker23n1
Cool, let's insult two of the most influential people of the 20th century as "nerds" and continue to perpetuate stereotypes about the millions of people behind the massive industries Steve and Bill have helped create.

That's not childish at all. Nope.

Additional suggestions: "Liars", a documentary about lawyers; "Thiefs", one about bankers; "Thugs & Terrorists", one about people of color.
Score: 6 Votes (Like | Disagree)

Cool, let's insult two of the most influential people of the 20th century as "nerds" and continue to perpetuate stereotypes about the millions of people behind the massive industries Steve and Bill have helped create.

That's not childish at all. Nope.

Additional suggestions: "Liars", a documentary about lawyers; "Thiefs", one about bankers; "Thugs & Terrorists", one about people of color.

Oh lord. Too bad Amazon doesn't sell a "sense of humor." But lets be real here... Bill Gates IS a nerd. Steve Jobs was one, but not as much as Woz is. Nerd is just a word. It's up to you to make it hurt you, and if it does then it says more about you than the person calling you that. And sometimes it's a term of endearment. Regardless parody done well is not childish, it's just human (in a good way).

Also a play or movie about lying lawyers and thieving bankers... this guy called Shakespeare was way ahead of you. Seems his stuff is pretty popular and has transcended and influenced not only generations but entire societies.

Don't really get why a story about "thugs and terrorists" would necessarily be about people of color. Godfather was about white people of Italian descent. Bonnie and Clyde were a couple of fair skinned mid-westerners. But there is a British comedy, Four Lions, about some incompetent jihadists. Very humorous and it even has actors of arabic descent playing the parts!
Score: 6 Votes (Like | Disagree)

Please let the madness around books/movies/plays about SJ end! Let's let him rest and just appreciate that we had him on this earth for a little while.

How about people stop using the term "nerd" to advertise anything computer/gaming?

Well for one - this show began as a festival show in 2005 - before Jobs was dead. It's gained a following and received great notices in various parts of the country. That's why it's getting produced.

As for "nerds" - it's because the plot isn't just about the later years. It's about the garage years too. Get over it.
Score: 4 Votes (Like | Disagree)

garirry
How about people stop using the term "nerd" to advertise anything computer/gaming?
Score: 3 Votes (Like | Disagree)

OMG testy! Anyone offended by the word "nerd" is a nerd!

How many more decades or centuries does computing have to endure until people stop treating it as "nerdy" and start treating it as normal and important?

Do you think nobody would object to a documentary about farmers titled "Rednecks & Hillbillies"?
Score: 3 Votes (Like | Disagree)

Boatboy24
Please let the madness around books/movies/plays about SJ end! Let's let him rest and just appreciate that we had him on this earth for a little while.
Score: 3 Votes (Like | Disagree)
Read All Comments