Apple is planning to open a retail store on the famous Avenue des Champs-Élysées in Paris, France, reports French site MacGeneration [Google Translate] citing information shared by French newspaper Le Figaro. Rumors about a store on Champs-Élysées have been circulating since 2012, but it appears Apple has finally secured a lease for a storefront on the famous avenue. 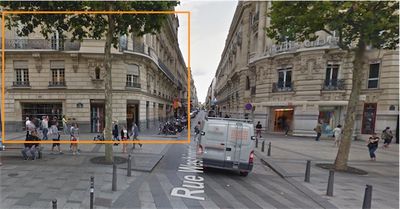 Google Maps view of prospective Apple Store location, via MacGeneration
Apple is said to have signed a 12 year lease for a building at 114 avenue des Champs-Élysées in December of 2015. The store will reportedly encompass an area of 6,200 square meters, with offices located above the retail space.

At the current time, 114 avenue des Champs-Élysées is home to several shops and a law firm, but Apple has leased the entire building. According to Le Figaro, Apple will not open the Champs-Élysées store until 2018 or 2019 because it needs time to create a building plan with architectural design partner Norman Foster and obtain authorization for a remodel.

If a store does indeed open on Champs-Élysées, it will be the 20th Apple retail store in France.

Nice of Apple to open new Apple stores, but it would be nicer if they opened Apple stores in new areas instead of populating countries that already have a ton of them available.

Apple's not running a charity. They put stores where there are markets to support them. For other less desirable areas they sell through Walmart, Best Buy, and Target.
Score: 5 Votes (Like | Disagree)

Money is just no object for Apple, is it?

Money is the object. Apple mints more revenue per square foot than the high end jewelry and fashion stores in the same neighborhoods. Just another investment with a positive return.
Score: 5 Votes (Like | Disagree)

garirry
Nice of Apple to open new Apple stores, but it would be nicer if they opened Apple stores in new areas instead of populating countries that already have a ton of them available.
Score: 2 Votes (Like | Disagree)

Money is the object. Apple mints more revenue per square foot than the high end jewelry and fashion stores in the same neighborhoods. Just another investment with a positive return.

Every single one of these are worlds absolute top and most expensive shopping locations on level of rental prices.

While @firewood is correct indeed on the fact that Apple stores are generating a huge load of revenue per sq foot, these locations are not about revenue.

Quoting Damian Lewis on Showtime's Billions: What's the point of having so much FU-money if I never can say FU?

These are statement locations, a reinforcement of Apple's plan to market fashion products rather than anything else.
People should buy an iPhone for the fashion statement. The fact it's just a fantastic device with great technology is just a bonus.
Score: 1 Votes (Like | Disagree)

How many flagship stores does Apple have in France?

They have two stores in Paris itself (one in an underground shopping area below the Louvre, and one near the opera which is their flagship store for Paris). They have another six stores in the greater Paris region (but they are all mall-type stores). Of the remaining eleven stores in France, four could be called flagship stores (in that they have high ceilings and have a nice storefront to the street): Lille, Strasbourg, Aix-en-Provence, and Bordeaux. You can see the full listing at: www.apple.com/fr/retail/storelist ('http://www.apple.com/fr/retail/storelist/') (a URL in which you can substitute the country code for France with that of other countries to get respective lists, eg, www.apple.com/de/retail/storelist ('http://www.apple.com/de/retail/storelist/')).
Score: 1 Votes (Like | Disagree)
Read All Comments