For those unfamiliar with the Flyover feature in Apple Maps, it lets users see photo-realistic 3D videos of select locations, with tools for zooming, panning, and rotating to get a closer look at notable landmarks and points of interest. Some of the locations listed may have previously been available as Flyover destinations, but were just added to Apple's list of Flyover locations. 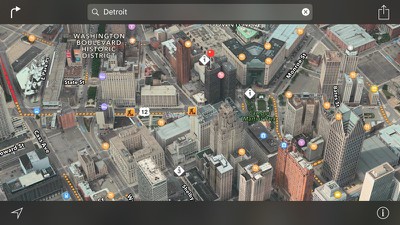 Flyover was introduced alongside iOS in 2012, but over the last three years, Apple has steadily added new Flyover locations to the Maps app. Earlier this year, Apple updated some major Flyover locations with real-time animated landmarks, making the Flyover experience even more immersive. Many Flyover locations have an additional City Tour feature that walks users through different landmarks in each city.

Münster, really, Apple?! There are lots of big cities in Germany, not available yet, and you chose Münster?

They add what is ready. Probably big cities require more work and more permissions to shoot a flyover.
Score: 4 Votes (Like | Disagree)

The most useless feature ever! I wish Apple would put their map efforts into improving accuracy and/or something useful like live traffic and Street View.

If its that useless why are Google trying to do 3D maps too? Why does nobody complain at the ridiculous waste of everyone's time when they 'open sourced' the effort to manually model all the buildings one at a time in sketchup? And why is nobody laughing at them when they get stuff wrong?

hofer
The most useless feature ever! I wish Apple would put their map efforts into improving accuracy and/or something useful like live traffic and Street View.
Score: 1 Votes (Like | Disagree)

Yep I always liked the igloo... Saw green day play there lol... I like Consol too though, going out this weekend for a couple games :)
Score: 1 Votes (Like | Disagree)

mainstreetmark
If they open-sourced this effort, all the major cities would be complete.
Score: 1 Votes (Like | Disagree)
Read All Comments

Wednesday July 8, 2020 9:35 am PDT by Joe Rossignol
Despite multiple reports indicating that Apple will not include EarPods or a wall charger with iPhone 12 models this year, one analyst believes that pricing will still increase slightly compared to the iPhone 11 lineup. In a research note provided to MacRumors, analyst Jeff Pu forecasted that iPhone 12 pricing will start at $749 for a new 5.4-inch model, an increase of $50 over the base...
Read Full Article • 232 comments