Apple appears to be working on an iOS app that will provide customers with easy access to Apple support staff, troubleshooting tips, and repair options for their iPhones, iPads, and other Apple devices. A series of screenshots of the app were provided by Sonny Dickson to uSwitch Tech, revealing key details about the app and what it's capable of.

There are direct options for chatting with an advisor, scheduling an in-store visit (which lists the next available appointment at a local Apple Store), and sending a device in for service, along with a list of support documents and guides to solve common problems like using iTunes to do a restore, maximizing battery life, or upgrading to the latest version of iOS. 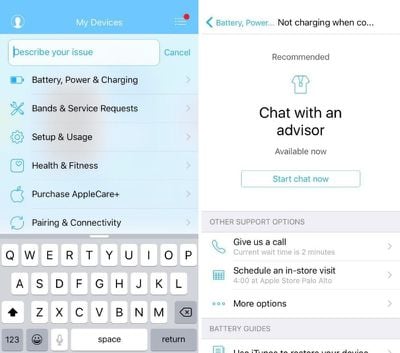 According to an "insider," the app is tied to an Apple ID and will automatically list all of the devices that each person owns, giving them direct access to pre-defined troubleshooting problems, much like Apple's support site does now. From there, it walks users through all of the available support options. It's said to be "highly interactive and well integrated."

Having a centralized spot to access support documents and repair options will be hugely useful for many users who may not know the extent of Apple's online support offerings. The app will also further streamline the repair and support process, taking some of the pressure off of in-store Genius employees who work on repairs and potentially cutting down on the number of people coming in to the store for small issues.

ethanwa79
The fact that Apple needs to make an app like this with us being on version 9 of iOS is not a good sign. I feel like the quality of Apple's software has taken a nosedive ever since iOS 7 was released.
Score: 18 Votes (Like | Disagree)

Good idea, but the people who would actually need this are probably people who will have no idea this app exists (unless it's preinstalled -- and let's hope it's not).

Huh? The app is a good idea according to you. But you say that it will be most useful to people who won't know it exist unless it's preinstalled, but you don't want that to happen. This makes NO sense.

I have plenty of apps I rarely use and some apple apps I don't use. Here's how I handle it. I move all of those apps to the last page of my apps screens. Pretty much out of the way and yet there if I should need them in the future. Very clever of me, don't you think. Wouldn't that be a better way to handle this than to exclude an app that you agree would be useful only because you don't want to see an icon that might ever be useful to you someday?

Why. What is so terrible about having them there. Are they really that offensive to you? See above for my suggestion.
Score: 17 Votes (Like | Disagree)

rorschach
Good idea, but the people who would actually need this are probably people who will have no idea this app exists (unless it's preinstalled -- and let's hope it's not).
Score: 5 Votes (Like | Disagree)

LordQ
Let's hope it is not US-only.
Score: 5 Votes (Like | Disagree)

DCYorke
So basically, an app version of https://supportprofile.apple.com
Score: 5 Votes (Like | Disagree)
Read All Comments