Last week some users and developers experienced an issue that displayed a "damaged" error when attempting to open select apps from the Mac App Store, including popular apps like 1Password, Tweetbot and Byword. Today, Apple has sent an email to developers explaining what happened and how to fix their apps. 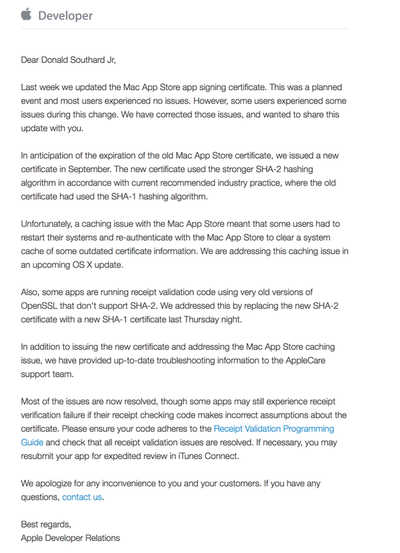 However, two issues caused users to experience errors when starting up apps. The first issue, according to Apple, is that there was a caching issue with the Mac App Store that required users to restart their computers and re-authenticate with the Mac App Store to clear out the old cache. Apple says it's working on a fix for this in an upcoming OS X update. The other issue is that some apps were running an older version of OpenSSL that didn't support SHA-2. Apple says it replaced the SHA-2 certificate with a new SHA-1 certificate last Thursday night.

Finally, Apple says that "most of the issues are now resolved", but that some apps might still experience problems if the apps make "incorrect assumptions" about the Mac App Store's security certificates. Apple asks developers to make sure their code adheres to the Receipt Validation Programming Guide and to resubmit apps for expedited review if necessary. The AppleCare support team has also been briefed with the latest troubleshooting information for users.

With all the ills in the world, you have time to be this bothered about this. Consider that for a moment.

This is not illsintheworldRumors.
Consider that for a moment.
Score: 15 Votes (Like | Disagree)

Ankou_Sabat
Actually this response does nothing about a much larger issue on the App Store.

Take the Tweetbot issue which I had hit me. They had released a new version, Tweetbot 2.1.1, right before this issue happened on Oct 15. This updated version is incompatible with Mac OS Mavericks (10.09) so those running Mavericks were stuck with the previous version. This means that for all those running an OS older than 10.10, you're only able to run Tweetbot 1.6.2. If you go to the App Store and try to update it, or even re-download on such an older OS it explicitly tells you of the incompatibility and says that it will download the "old" version for compatibility.

That would be fine, except the old versions are still signed with the EXPIRED CERTIFICATE! So even if you follow the directions to "re-download the damaged app" it will refuse to run because the certificate signed is expired. So the only "fix" is to upgrade your OS to 10.10. Sure it can be argued to upgrade to the latest version, but there are quite a few instances where this is impossible to do and as such, Apple has just put an expiration date on older software preventing you from running it by linking it to this certificate and not providing developers a way to re-sign those submissions with an updated cert. Neither does the App Store itself provide such a facility.

So if by the current expiration date which I believe now is 2 years from now, if your computer is unable to be upgraded to current OS and the current version is unsupported on your system, then you are completely out of luck and stuck with no app that you paid for. This makes the "download old version" feature in the App Store completely flawed if they provide no way to back sign older provided version on the store front.
Score: 11 Votes (Like | Disagree)

Software is like that. It's always just about to fall down around our ears, except usually someone is there trying to stop that from happening. Sometimes there are screw ups.

Software purchased through the MAS is like that. From what I read, people who purchased the same software directly from the developer or through other means didn't have to deal with this nonsense.

In the good ol' days, prior to the existence of the MAS, online activation, and subscription services, I'd install a program and it would just work™ until it got replaced or the computer died.
Score: 9 Votes (Like | Disagree)

Did someone at Apple win a prize for drafting a note with the most use of "issues" in the first paragraph? How did this letter get by Apple PR?

If Apple normally does one thing well, it's strong apologies once they've completed an investigation into a problem. This letter is not that.


Yes let's tear apart the letter for next 30 posts shall we. Let's question Apples integrity over it.

applerocks
Did someone at Apple win a prize for drafting a note with the most use of "issues" in the first paragraph? How did this letter get by Apple PR?

If Apple normally does one thing well, it's strong apologies once they've completed an investigation into a problem. This letter is not that.
Score: 5 Votes (Like | Disagree)

alphaod
Maybe it'll get some developers to finally update their apps.
Score: 5 Votes (Like | Disagree)
Read All Comments