Distracted Driving Laws Yet to Catch Up With Apple Watch

While several states and countries have laws in place that make operating a handheld device such as a smartphone or portable media player illegal, the release of the Apple Watch has created a gray area in terms of distracted driving legislation. Given that the Apple Watch is technically not a handheld device, the laws in many jurisdictions are left open to interpretation at this point.

Regardless of the laws in your local area, it is highly recommended that you keep your eyes on the road and remain focused on driving at all times. Using your Apple Watch while driving is dangerous for both you and the drivers sharing the road with you, no matter how skilled of a driver you may be, and distracted driving in general is still a punishable offense in many jurisdictions.

In the United States, many states have similar distracted driving laws with different conditions that must be followed. All states except Arizona, Missouri and Montana have a text messaging ban that could extend to the Apple Watch, or confirmed plans to enact one within the next six months, and Arizona is the only state without a text messaging ban for novice drivers entirely.

None of the U.S. states have updated their distracted driving laws to specifically address the Apple Watch or other wearable devices¹, and National Safety Council CEO Deborah Hersman confirmed in April that no states currently have plans to do so. Essentially, this means that the Apple Watch may be legal to use or operate while driving, but it is still highly unrecommended.

Additionally, some states have more general laws about which electronic devices are banned while driving. In Oregon, for example, the state law specifically bans drivers from holding or operating "mobile communication devices," which it defines as "a text messaging device or a wireless, two-way communication device," which could be interpreted to include the Apple Watch.


Last month, a Coalition Against Distracted Driving led by Stephen L. Joseph filed a lawsuit in Los Angeles court against Apple, Samsung, Google and Microsoft, seeking an injunction that would require the companies to fund an "effective and ongoing" national public education campaign in the United States that explain the risks of using smartwatches and smartphones while driving.

To check distracted driving laws on a state-by-state basis, the U.S. government has setup a useful website called Distraction.gov that displays an interactive map outlining primary and secondary laws for text messaging and cell phone use behind the wheel. Currently, 45 states, DC, Puerto Rico, Guam, and the US Virgin Islands ban text messaging for all drivers, which could apply to the Apple Watch.

In Ontario, it is illegal for drivers to talk, text, type, dial or email using hand-held cell phones and other hand-held communications and entertainment devices², such as smartphones, portable media players, GPS systems and laptops. The province has not currently designated the Apple Watch or other smartwatches as being illegal to use while operating a motor vehicle.

Nevertheless, endangering others because of any distraction in Ontario can result in being charged with careless driving, which carries penalties of six demerit points, fines up to $2,000 and/or a jail term of six months and up to a two-year license suspension. Ontario Provincial Police officers are free to interpret the Ontario Highway Traffic Act as they wish as it relates to distracted driving.

Québec's Highway Safety Code outlaws holding or operating handheld electronic devices with a telephone function while driving, but does not make any references to the Apple Watch or other wearable devices. The Canadian Press reported in September 2014 that Québec was reviewing its distracted driving law³, but the province has yet to make any changes to date.

Ultimately, this information should be followed for reference only and does not serve as legal advice. We encourage drivers in various countries to check their local laws for the most accurate and up-to-date information. More importantly, remember that you are sharing the road with others and drive safely.

ElRojito
Saw this coming a mile away. The driver didn't, though.
Score: 32 Votes (Like | Disagree)

Komrad808
Soon there will be a bill that will ban all electronic use while driving. But we still can eat, drink (a beverage) and put on make up while driving.
Score: 18 Votes (Like | Disagree)

DudeDad
How many are reading this while driving?
Score: 15 Votes (Like | Disagree)

raj
Not a new problem

Come on, people! This isn't a new problem. Smart watches have been available for quite a few years now and Apple is only the latest version (and not necessarily the best). Driver distraction is driver distraction, regardless of the origin of the distraction. We don't need a specific law about every possible distraction. What about people who drive with a baby in a carrier in the back seat? Do we have a specific law about that distraction? What about male drivers with their wife or girlfriend wearing a short skirt in the passenger seat? Do we have a law about *that* distraction?
Score: 12 Votes (Like | Disagree) 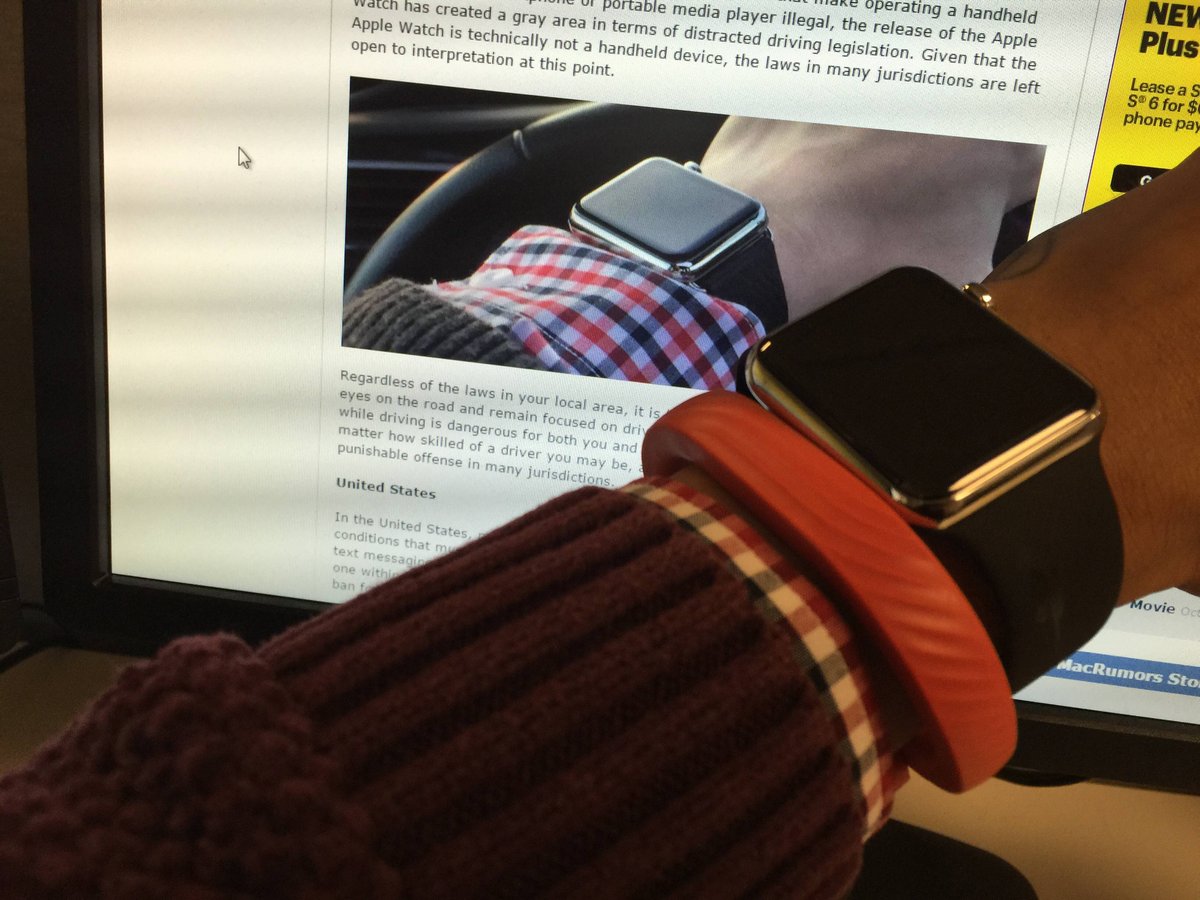 driving and texting is the easiest thing....theres a bunch of stupid people that cant multi task jacking people up.


I would bet you aren't as good at it as you think you are.
Score: 7 Votes (Like | Disagree)
Read All Comments