Ahead of the Apple Watch launch tomorrow, Apple has shared a selection of apps that it believes all new Apple Watch owners should download. Provided to Buzzfeed, the list covers a wide range of apps, from those that provide news coverage to those that help people share photos or travel around town. 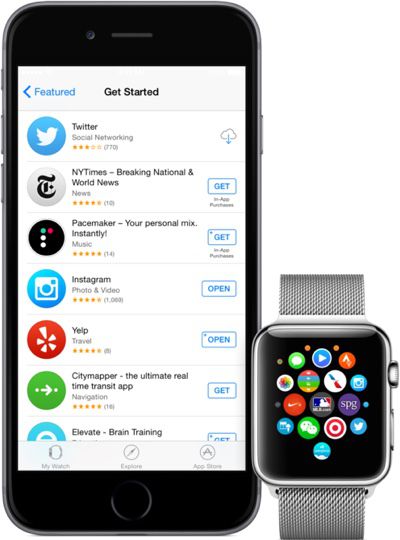 Yelp got a mention, as did Target's app, which includes a useful shopping list feature, and Dark Sky was highlighted as the must-have weather app. Citymapper was mentioned as a useful transit app, showing the fastest public transit routes, and Pacemaker's music mixing app was the only music app on the list. Elevate's brain training app was Apple's most unusual pick.

Given the Apple Watch's position as a health and fitness device, Apple also shared several notable fitness and nutrition apps, including Fitstar Yoga for yoga, Strava for runners, and Golfshot for golfers. Apple recommended Lifesum for tracking calories and Centered for meditation.

When Apple Watches reach the hands of customers tomorrow, there will be more than 2,000 Apple Watch apps available for the device.

Four oF NINE
Looking forward to the day when this watch is old news.
Score: 14 Votes (Like | Disagree)

dontwalkhand
Target bothers me in that they do have Apple Pay in the app, and now a Watch app that is featured by Apple- But don't accept Apple Pay in the store - despite getting hacked!!
Score: 14 Votes (Like | Disagree)

mrgraff
How about giving me my watch first ?
Score: 9 Votes (Like | Disagree)

How about giving me my watch first ?


Then you'll be complaining that the AppleWatch app store isn't up yet.....
Score: 8 Votes (Like | Disagree)

SpectatorHere
Finally some news about the apple watch. I've been waiting and waiting but no posts about this amazing product. ;)
Score: 7 Votes (Like | Disagree)

wingsabr
How about the must have watch...oh, wait, still processing :/
Score: 7 Votes (Like | Disagree)
Read All Comments