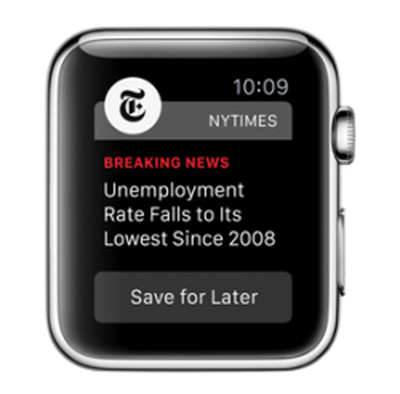 Many of the Apple Watch news apps will provide breaking news notifications and bite-sized headlines through Glances, while some provide additional functionality such as expanded views and personal feeds of news stories, reviews, opinions and more. As the Apple Watch becomes more widely adopted, and launches in additional countries, more apps from well-known news publications should begin to surface on the App Store.

Zxxv
proof people are out of ideas
Score: 15 Votes (Like | Disagree)

proof people are out of ideas

lewisd25
I just want a news app to tap me when there is emergent breaking news on a national or global level. I don't need to know every time Bruce Jenner has an operation.
Score: 8 Votes (Like | Disagree)

But wait, you need an iPhone to be either in your pocket or on the same wi-fi network for this to work right?

I don't know about you Keith, but I "always" have my iPhone in my pocket, on my desk, or in my hand. I expect that's true for 98% of people out there who own iPhones.
Score: 7 Votes (Like | Disagree)

But wait, you need an iPhone to be either in your pocket or on the same wi-fi network for this to work right?


You need an iPhone for Apple Watch to work, period.
Score: 7 Votes (Like | Disagree)
Read All Comments