Apple's upcoming ultra thin 12-inch MacBook with a Retina display has been overshadowed by all of the Apple Watch news that's been surfacing over the course of the last week, but the super slim device is set to launch online and in-stores on Friday, April 10, alongside the Apple Watch.

Ahead of the MacBook's launch, Apple has given select sites MacBook review units to test out, and those early MacBook reviews are coming out today. We're gathering up tidbits from some of the best reviews below, which give us our first look at how the MacBook performs with its low power Core M processor and a look at how users feel about the new keyboard and the new trackpad. 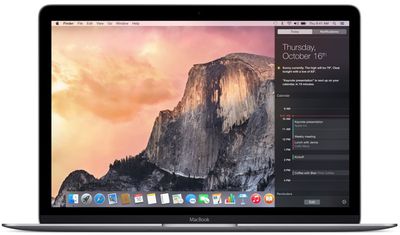 Many of the reviewers loved the extremely thin size of the MacBook, its impressive Retina display, and its Force Touch Trackpad, but were unhappy with some of the compromises that are made with the machine -- lack of ports, the keyboard, the processing speed, and the high price. Almost all of the reviews pointed out some of the shortcomings in the Core M processor, noting that it's much slower than Apple's other notebook offerings and suitable for lighter use, much like a Chromebook. It was, however, able to run Photoshop and Logic Pro, just slower.

Several of the reviewers disliked the new keyboard when first trying it due to its thin keys with little travel, but most were able to adjust to the different feel of typing on it after a short period of time. The increased size of the keys was also hard to adjust to for touch typists. Battery life in general ranged from seven hours up, but most of the reviews saw shorter battery life than the promised nine hours of web browsing. Overall, the consensus between reviewers seemed to be that while this is a great MacBook, it's not a solution for everyone and is going to appeal to a niche set of people due to its high price and the performance compromises.

Basically, if you do anything that's going to really tax the processor, this laptop probably isn't going to cut it for you. In that sense it's actually kind of like a Chromebook. It's fast enough for 70 percent of what I do, but a little slower than what I'm used to. For about 20 percent of what I do -- mostly photo editing -- it works but requires patience. But it's the last 10 percent that's hard: video editing, really big iPhoto libraries, basically anything processor-intensive can get rough.

The port situation is the biggest problem. The question isn't whether people can live with only one port, but whether they'll want to put up with it when there are so many other options available. Using the MacBook as a primary computer requires you to subscribe to a mostly wireless lifestyle that not everyone is going to be ready for, and even if you already use Macs switching to a MacBook means throwing your dongle and cable arsenal out and starting over. [...]

The MacBook keyboard's better than I expected it to be--I was able to score 118 words per minute on TypeRacer using it--but it never felt particularly comfortable. If you're not a keyboard snob, you may not even notice the difference, but if there's any single feature that would make me reluctant to buy a MacBook, it would be the keyboard. [...]

I never found using the MacBook sluggish. Then again, I didn't try to play games on it. But again, if you're trying to play games on the MacBook, you may be missing the point. The integrated Intel HD Graphics 5300 processor is more than enough to drive the Retina display with no lag, and I found Apple's various interface animations ran smoothly.

I came to the MacBook with certain expectations; specifically, that it would not be able to meet my more "pro" level needs, in terms of Photoshop, Final Cut Pro and Logic Pro. Luckily, the MacBook defied those expectations and performed well with each of the above applications.

Which isn't to say performance is on par with, say, the brand new 13-inch MacBook Pro -- it isn't. But pre-launch concerns of this machine being seriously hampered by its low-power Intel M processor were, in my experience, very premature. The new MacBook handled the tasks I threw at it so well that I am no seriously considering whether or not I can adopt one full-time, as a replacement to my original 2012 15-inch Retina MacBook Pro road warrior.

That's the thing, though: While USB Type-C ports will one day become industry standard, they're still uncommon enough that you will need a dongle to plug in any of your peripherals that use a full-sized USB Type-A connector. In my case, that meant I couldn't charge my phone off my laptop. I also couldn't use the USB headset I normally wear while podcasting and making voice recordings. If I did want to use my USB gadgets, I would have had to plug in a $79 adapter -- that's right, it's not even included in the box. Again, I expect USB Type-C will one day be the norm, and it's possible that your needs are simple enough that you can already live without the full-sized USB ports.

I expect the new MacBook to follow the same path as the Air. Over the next few years, it will improve, and become an affordable, indispensable tool for life in the future. But here, now, in the present day, there are more practical slim, everyday laptop choices. The MacBook Air is the best option all around, the MacBook Pro Retina 13 is a great step up, and PC users can do no better than Dell's latest XPS 13.

The MacBook's Retina screen is joy to behold. As someone who has grown addicted to high-res displays, having such crisp visuals on a notebook this small is fantastic. In fact, I'm not sure how I'm going to return to my 13-inch MacBook Air.

Colors pop, text is crisp, and everything is visible from all angles. Using it outdoors or in low light was no problem -- the screen is great.

Crosscreek
The thin thing that Apple is doing is not appealing any longer when sacrificing performance.
Score: 74 Votes (Like | Disagree)

maflynn
Not surprising given the specs, this is not a 1,500 dollar laptop even if it is priced that way.
Score: 50 Votes (Like | Disagree)

The thin thing that Apple is doing is not appealing any longer when sacrificing performance.


This. It used to be cool until it got out of control.
Score: 38 Votes (Like | Disagree)

D28Z98
"I'd totally sacrifice all of the power of a modern laptop, and use something with the speed of a 2011 MacBook in order to just have it a TINY bit thinner!" - said no one, ever.

To me these just seem like Apple showing off what they CAN accomplish now, and nothing more.
Score: 36 Votes (Like | Disagree)

thatsfinebut
I am typically extremely pro-Apple, but the prices of the dongles for this MacBook (in addition to the price of the MacBook) are indefensible.
Score: 34 Votes (Like | Disagree)
Read All Comments