Apple Announces Apple Watch Pre-Orders Will Kick Off at 12:01 AM PT on April 10

Apple today updated the Apple Watch page of its online store to note that online pre-orders for the Apple Watch will begin at 12:01 AM Pacific Time on Friday, April 10. Just after midnight on the West Coast is Apple's typical time for pre-orders, and the company will likely take the store down beginning at 9PM to prepare for orders. 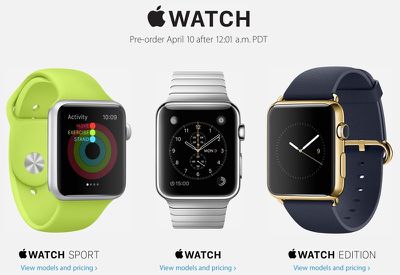 Here's a full list of pre-order times by country (in local time):

Apple will accept orders both through its website and through its Apple Store app on the iPhone. Placing an order through the app can often bypass some of the congestion that occurs when pre-orders first begin.

Apple only made 100 of these atrocities. Makes it easier to claim it sold out.

Anyone who preorders this disaster needs to be voted off the planet.

iJandro
Computers to Apple's servers at midnight can be summed up in one gif...

Thursday September 29, 2022 7:44 am PDT by Juli Clover
The iPhone 14 Pro and Pro Max introduce some major improvements in camera technology, adding a 48-megapixel lens and low-light improvements across all lenses with the new Photonic Engine. We've spent the last week working on an in-depth comparison that pits the new iPhone 14 Pro Max against the prior-generation iPhone 13 Pro Max to see just how much better the iPhone 14 Pro Max can be. Subscrib ...
Read Full Article • 108 comments

Thursday September 29, 2022 12:38 pm PDT by Juli Clover
Tony Blevins, Apple's vice president of procurement, is set to depart the company after he made a crude comment about his profession in a recent TikTok video, reports Bloomberg. Blevins was in a video by TikTok creator Daniel Mac, who was doing a series on the jobs of people he spotted with expensive cars. After seeing Blevins in an expensive Mercedes-Benz SLR McLaren, Mac asked Blevins what ...
Read Full Article • 543 comments