At its Apple Watch event on March 9, Apple highlighted several apps that will be available on the Apple Watch, including an app from American Airlines, which will let users receive flight information, check in for their flights, and more. 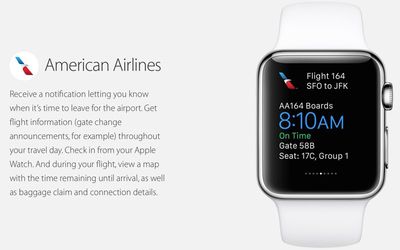 Through a glance option, which is accessed by swiping right on the watch face, the British Airways app will display a summary of a customer's next flight, offering details like flight number, flight status, a countdown to departure time, and the weather at the destination. All of that information will be available at a single glance, preventing users from needing to rifle through emails and open up apps to access flight details.

The app will also support on-wrist check-ins for flights, and it will deliver notifications to direct users to their appropriate gates. At certain airport terminals, such as Heathrow's Terminal 5, users will receive welcome messages powered by iBeacon.

British Airways' Apple Watch app
Earlier this week, VentureBeat asked several airlines about their plans for Apple Watch apps, which yielded information about two upcoming apps from Delta and United. The Delta app that's in development will deliver notifications about flights to users ahead of their flights, and it will give them access to the boarding pass stored on their iPhones.

Like the apps from other airlines, it will offer flight numbers, gate numbers, flight times, and other info. If a flight gets changed, for example, users will get a notification on their Apple Watch. There will also be a notification when a flight is approaching a destination city, with information about luggage pickup.

Delta Apple Watch app, image courtesy of VentureBeat
United Airlines wasn't prepared to share app screenshots of its upcoming Apple Watch app, but it did divulge some details about it. The app will offer at-a-glance information on upcoming flights, including gate numbers and status, plus it lets users view their flight reservations within the United Airlines Apple Watch app. It will also pull a traveler's boarding pass from the Passbook app, and it's able to alert users if flight times or gate numbers change.

Southwest and Virgin America told VentureBeat they were not working on Apple Watch apps at the present time, but the two airlines, along with other airlines, will likely create apps as they see their competition developing apps for the device.

The Apple Watch will become available on April 24, with pre-orders beginning on April 10. Developers have been hard at work putting the finishing touches on apps ahead of the launch, with many even flying out to Cupertino for guidance from Apple, so there should be a wealth of third-party apps available to consumers right on launch day.

duaneu
I wonder if they'll make you put the watch in airplane mode.
Score: 10 Votes (Like | Disagree)

troop231
Now we'll have a cabin full of people taking calls on their wrist lol.
Score: 9 Votes (Like | Disagree)

KALLT
Im actually surprised to see that much interest in the Apple Watch ecosystem, even though it may not become all that popular. Meanwhile, Windows Phone and BlackBerry are left in the dust. Apples brand identity continues to be remarkably strong.
Score: 8 Votes (Like | Disagree)

NeutralGeek
I hope these airline apps will have the option to automatically send me a heartbeat to gently remind me with 'It's boarding time, come fly with me!".
Score: 6 Votes (Like | Disagree)

ArtOfWarfare
Apps for scheduled things, like flights and movies, are killer watch apps, IMO. When I see apps like this, I catch myself thinking "Maybe if I just spend $350 on generation one it'll be okay..."

But I don't have even $350 to burn right now, and generation two is always much better than generation one, so I'll let the rest of you work out all the bugs for me.
Score: 4 Votes (Like | Disagree)

tommyboy21
Excited to see many airlines embracing this...but I wish Southwest would get with the program.
Score: 4 Votes (Like | Disagree)
Read All Comments