Twelve South today revealed the BaseLift for MacBook, a "super-thin, microfiber-layered pad" that attaches to the bottom of any MacBook and can instantly fold up, similar to an iPad Smart Cover, to provide an elevated screen and angled keyboard to users on either a MacBook Air or MacBook Pro. Once attached, BaseLift for MacBook stays connected to the MacBook, and is thin enough to fit into "most bags and laptop cases" along with a user's computer. 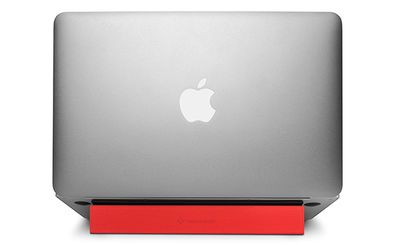 "If you have a MacBook, get a BaseLift," said Andrew Green, Creative Director of Twelve South. "Without a doubt, it's one of the best MacBook accessories we've ever invented. It is so simple and adds so much comfort for just $39, that everyone with a MacBook should have one. When I'm on a MacBook without a BaseLift now, I miss it terribly -- and that's the true test of a great accessory."

BaseLift aims to be more than a MacBook stand, with Twelve South claiming that the device acts as a buffer between the initial chilliness of a MacBook and even the heat given off when heavily using the device.

The BaseLift fits any current model of the MacBook Air and MacBook Pro, with the default BaseLift Pad aimed at the 11" MacBook Air and a few optional "Fit Strip" accessories included for users on 13" and 15" models. The company promises that the adhesive SurfaceGrip technology used to attach the accessory to a MacBook won't leave a sticky residue if a user ever chooses to remove the BaseLift Pad from the device.

dwman
Isn't that essentially a magnetic ipad cover stuck to the bottom of a MB Air?
Score: 6 Votes (Like | Disagree)

topmounter
Good on them, this looks to be a more socially acceptable method of elevating my MBA while it is sitting on my lap.
Score: 5 Votes (Like | Disagree)

kristoffer4
Why would you prop up your mac? Is it it easier to type on that way?
Score: 3 Votes (Like | Disagree)

spyguy10709
As usual with twelvesouth, great product, looks really well executed and with high enough quality - but the price is ridiculous.
Score: 3 Votes (Like | Disagree)

$40 for this? Wow. My ingenious wife accomplished the same thing by using two doorstops under her MacBook Pro. Cost? About $7.00 for both of them.


Id like to see her do that in a starbucks or airport lol...expensive yes, smart also yes. Portable and practical, yes
Score: 3 Votes (Like | Disagree)

avanpelt
$40 for this? Wow. My ingenious wife accomplished the same thing by using two doorstops under her MacBook Pro. Cost? About $7.00 for both of them.
Score: 3 Votes (Like | Disagree)
Read All Comments