As we mentioned in last week's Buyer's Guide post, the deals in the month of January aren't great, but there are still a few discounts to be had on various products like the previous-generation iPads, the Retina iMac, the MacBook Air, and a few Retina MacBook Pro models.

We've also got a handful of accessory deals for you this week, on iPhone cases, iPad keyboard cases, Thunderbolt docks, and the Jawbone Big Jambox, plus some deals on Mac and iOS apps.

As of yesterday, Apple is selling the new 27-inch Retina iMac in its online refurbished store, offering discounts of 15 percent off, which beats any Retina iMac price that can be found in store this week.

Selection varies, but there are quite a few configurations available for purchase at a discount, which gives consumers looking for a Retina iMac deal a lot to choose from beyond the standard configuration. 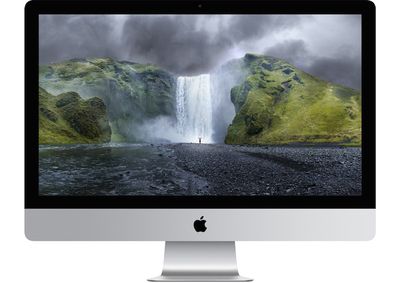 All of Apple's refurbished machines come with a 1 year warranty, but stock fluctuates often, so potential buyers may need to wait for a desired machine to show up in the store.

We don't recommend buying an iPad Air 2 or Retina iPad mini 3 this week if you can help it because there are no sales going on, but Best Buy is still offering now-discontinued higher-capacity Cellular versions of the iPad Air and the iPad mini 2 at discounted prices up to $130 off the standard price.

MacMall is offering $50 off its stock of Mac Pros through 1/31, and the discount can be applied by using the coupon code MWBCJMACRUMORS. MacMall has several different configurations, but the base stock 4-core model is priced at $2,839.99 before the $50 discount, and the stock 6-core model is priced at $3,739.99. With the discounts, MacRumors readers can get a total of $201 and $301 off, respectively. MacMall also has many other quad-core to 12-core configurations available for purchase.

Apple's free app of the week is Marvell Pinball, a game that's normally priced at $0.99. It'll be available for free for the next seven days.

Goat Simulator is 60 percent off for a limited time, dropping the price to $2.99. Space Age: A Cosmic Adventure is also on sale for a limited time for $1.99, down from $3.99. For more app deals, make sure to check out our sister site AppShopper, which has a section dedicated to price drops.

MacHeist also has a bundle of Mac Apps for $14.99, which includes Default Folder X, VirusBarrier, uBar, Speedy, TotalFinder, Parallels Access, CodeKit, and Cocktail. Little Snitch and Postbox will be included if enough bundles are sold.

Groupon is offering a refurbished Jawbone UP24 for $69.99, down from the original price of $99. The Speck CandyShell Case for the iPad mini is also available from Groupon for $11.99, down from its regular price of $44.95.

Logitech's Ultrathin Bluetooth keyboard for the iPad mini can be purchased for $37.99 from Groupon, down from $79.99, and Daily Steals has Apple Earpod earphones for $9 instead of $29.