Unlocked, SIM-Free iPhone 6 and 6 Plus Models Now Available in U.S. with 3-5 Day Shipping

Tuesday January 6, 2015 2:26 am PST by Richard Padilla
As indicated yesterday, Apple has begun selling unlocked, SIM-free versions of the iPhone 6 and iPhone 6 Plus on its U.S. online store. 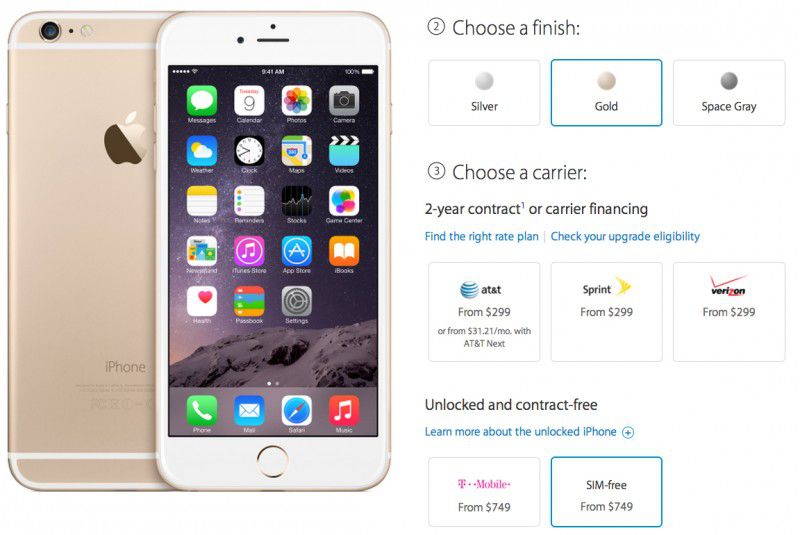 The SIM-free versions of the iPhone 6 and 6 Plus are the same as the full-priced, carrier-specific models that have been sold by Apple since the launch of both phones. For example, the iPhone 6 models offered by T-Mobile have been unlocked since launch, although it is unknown why Apple chooses to advertise both. The SIM-free and T-Mobile versions of the iPhone 6 can be used with a number of GSM carriers around the world, as a user only needs to provide a compatible Nano SIM for cellular connectivity.

All storage capacities and colors of the SIM-free iPhone 6 and iPhone 6 Plus are shown as ready to ship within 3-5 business days. The phones are also expected to be offered at Apple's retail locations starting today.

BCWorld
hey APPLE! How about offering these on LAUNCH DAY for the iPhone 6s THIS YEAR?? That would be great! :)
Rating: 8 Votes

vmachiel
And the US is caught up with the world again:)
Rating: 6 Votes

As I have said since the day the IPhone 6 was announced. I won't be buying a new iPhone until a new 4" iPhone is available. People like choice, and not everyone wants a phablet. Not sure why Tim can't get that through his brain. I've found plenty of 4" Androids to get in the meantime.


I'm trying to figure out what this thread has to do with the possibility of a new 4" iPhone being released, but I'm coming up with nothing. Help me out? :)
Rating: 4 Votes

BvizioN
The only thing from Apple that is not first in US.
In UK we get Sim free iPhone's on the first day of it's launch.
Rating: 4 Votes

You mean they were only offered as locked in US, all this entire time ?


Any phone paid full price from Apple store came unlocked. You just had to swap out the carrier sim that came in it.

They are just selling a sim-less version now. Why? No clue. Seems pointless.

hey APPLE! How about offering these on LAUNCH DAY for the iPhone 6s THIS YEAR?? That would be great! :)


There is no reason to. You have to open the sim tray to insert your carrier of choice sim anyway, it doesn't hurt anything to discard whatever sim came in it. Empty sim tray or occupied, it doesn't effect anything.
Rating: 4 Votes

The "T-Mobile" iPhone 6 purchased at full price at the Apple store (not on a payment plan from TM) was unlocked. You just had to switch out the SIM card. Don't see what the big deal is about having it SIM free...


This time it's a little different since the SIM-free version has the extra TD-LTE bands that Sprint and some international carriers use, and it is also explicitly whitelisted for Sprint and Verizon, unlike the T-Mobile version.
Rating: 3 Votes

mattopotamus
damnit, someone go buy the SIM free version and see if verizon will activate a new line!
Rating: 3 Votes

KeepCalmPeople
I'm happy for those forum members who have held out, against many of us who said that the unlocked 6/6+ was already available, for the officially unlocked 'world phone' model to become available. If you want/need those extra bands for LTE use outside the US, then these are the phones to get.
Rating: 3 Votes

Ok so what's the actual prize in California or New York? 649$ is fake for what you say


Its not "fake". It is the MSRP. Then you add taxes. The states of California and NY have different tax % so you just add that on to the price. Here, the states collect local taxes so each state decides their tax %. Not complicated at all.
If you really want to save a couple percent (or more) on taxes, drive or fly to a state with lower taxes and buy the phone. Or maybe you are there for business so you dont actually spend the $ on travel :D.
Rating: 3 Votes

That means that iPhones in different states have different prices?


It depends on how you look at it. The retailer's price is the same, but the buyer will pay slightly different amounts depending upon how much tax the localities collect.
Rating: 3 Votes