Thunderbolt Display owners can download the update from the Mac App Store. 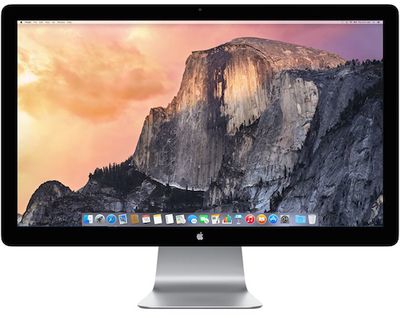 Thunderbolt Display Firmware updates are fairly rare, with the last firmware update released in December of 2011 to fix an issue with fan noise.

xizdun
As many of you know, the current Thunderbolt technology doesn't support 5K. You'd have to use two Thunderbolt cables to transmit 5K resolution data. Thus why Apple didn't launch a 5K Thunderbolt Display alongside the "iMac with Retina 5K".
Score: 7 Votes (Like | Disagree)

zorinlynx
It is very possible to build a 5K Thunderbolt display.

The solution is to integrate a GPU into the display, then connect that GPU to the Mac via Thunderbolt. Thunderbolt supports GPUs; it is essentially a PCI Express bus.

The GPU in the display can then privately drive as many pixels as you want, and the performance will be more than adequate since you basically have a PCI express bus equivalent between it and the computer. This way you're not having to send every pixel on the screen to the display 60 times a second.

Apple isn't releasing a 5K Thunderbolt display either because they don't want to, or don't think it will sell.
Score: 5 Votes (Like | Disagree)

AlecZ
I read the first line, "Apple Releases Thunderbolt Display," got excited, then was let down.
Score: 5 Votes (Like | Disagree)
Read All Comments