Since it opened in 2006, Apple's iconic glass cube Fifth Avenue retail store in New York has been praised for its design and its ability to attract a large amount of customers daily. Now, author Vicky Ward (via ifoAppleStore) has shared new details about the store's beginnings on the plaza of the General Motors Building in her book The Liar's Ball: The Extraordinary Saga of How One Building Broke the World's Toughest Tycoons. 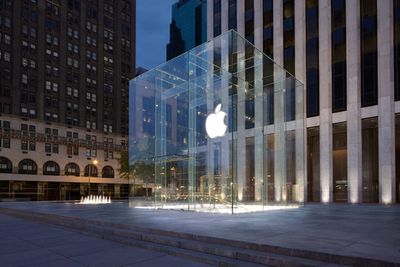 Ideas for a store on Fifth Avenue originally began in November 2003 when former Apple CEO Steve Jobs met with property mogul Harry Macklowe after being connected through Apple's former Vice President of Real Estate George Blankenship. Jobs initially wanted a store that "would be open 24/7", and worked with architects from architectural firm Bohlin Cywinski Jackson who designed Apple's store in SoHo, Manhattan.

It was at that point where Jobs, Macklowe, and the designers thought of placing a square glass cube in an unused basement within the GM Building's Plaza:

What happened next has long been the subject of speculation and some dispute: Who came up the idea of placing a 30‐foot square glass cube — the world’s “smallest skyscraper” — in the middle of the GM Building plaza? In that lightbulb moment, an unused basement that had caused headaches for its owners for more than 40 years morphed into what is arguably the most famous retail space in the world.

Jobs initially wanted a 40-foot cube, leading the designers to set up a scaffolding mockup of the building. However, once Jobs and other Apple executives went to go see the mockup, all agreed that it was too big and obscured the vision for the store. However, Macklowe also showed off a 30-foot cube built secretly underneath, which caused Jobs and the Apple executives to agree to the size.

From there, Macklowe convinced retailers and a CBS studio residing in the area to move, as construction began while Jobs waited. The store eventually opened on May 19, 2006 to much public attention, and went on to become one of Apple's busiest and most iconic stores.

Macklowe's real estate attorney also later regretted not negotiating a higher "percentage rent" with Apple, which saw his client receiving a portion of the store's profits. Macklowe called the negotiations "horrendously low," and claims that Apple had no idea just how well the store was going to do in business per year.

The difference is huge. The 40 foot one is 2.37 times the volume. Learn math.


was that last part really needed? it completely invalidates whatever point you were trying to make.
Score: 11 Votes (Like | Disagree)

It was a space probably more suited for an equipment vault. No windows,

Is percentage rent on top of fixed rent?

It can be. The devil is in the details...

The difference is huge. The 40 foot one is 2.37 times the volume. Learn math.

Add on the weight per square inch of the glass, and those would be HUGE and HEAVY pieces.

I wonder why it had been such a problem from them.

It was a space probably more suited for an equipment vault. No windows, only small doors, no street access. I'm sure they had to put dehumidifiers in to keep the moisture down. Popping the hole in it and building the cube over it was an EPIC idea. You basically get your 'storefront' for a 'dungeon' and get to scream 'I'M HERE!' in a very unique way.

It was a very creative way to make the space usable.
Score: 6 Votes (Like | Disagree)


Nice, now let's get started on "your and you're"
Score: 5 Votes (Like | Disagree)
Read All Comments