In addition to the return of the iTunes Festival channel for Apple TV today ahead of September's concert series in London, Apple has also added a new Showtime Anytime channel to its set-top box. 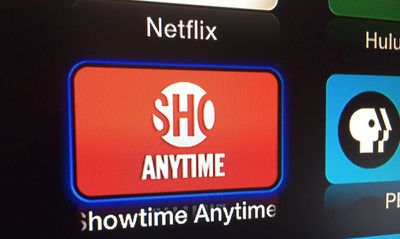 The Apple TV channel is a companion to the Showtime premium cable network and offers limited free content to all users. Most content, which includes live and on-demand shows and events, is limited to customers who subscribe to the network through a participating cable provider.

Update 8:52 AM: As noted by Mac1 [Google Translate], Norwegian public television network NRK has also launched on Apple TV in that country.

TheRealTVGuy
Thoughts on a la carte...

We traditional broadcasters only care about verifiable eyeballs. Something we can take to the local car dealer/grocer/ad agency/whoever and say "See! Advertise with us for X dollars and you'll be seen by Y many people!"

The cable companies invested (many times heavily) into the infrastructure (physical copper and fiber in the ground, the head-ends, etc.) and sold their subscribers' eyeballs to the networks. "See! Sign this agreement and we'll deliver X potential eyeballs and even Y amount of dollars to your revenue stream. Provided of course that you play by these rules which state you can't offer your services a la carte and cut us out of the deal."

One of the problems now is that the networks have grown accustomed to this revenue and ratings stream and are very nervous about possibly upsetting the hand that has fed them and provided for their growth for so many years.

Another problem is that cable is still an Oligopoly and, at least for the last-mile, its a monopoly based on who owns the physical cabling in the ground. Very little incentive for one company to change the business model when they're all enjoying the hayride.

Finally, the biggest reason Apple can't "just do what they did with iTunes, the iPod, and the recording industry", is that the cable TV industry has much tighter control than the recording industry did. You could copy tapes and CDs easily. You could import a CD, upload it to Napster, and share it easily. There really weren't many anti-copy safeguards because at some point, the audio signal had to become analog in order for an amplifier to push it through your speakers and into your ears. The record industry was losing their a$$e$ and couldn't see a solution until Steve came riding in on a white horse and saved them (while taking a nice % of each transaction, of course.) The result was a win-win situation, but more so for consumers. The record industry's sales were saved, but they weren't seeing the same rate of return as before. Meanwhile consumers could now choose their music a la carte, many times at a cost-savings. No more did you have to pay $15.99 for a twelve track album that included three songs you actually liked, just to have the one song you really loved.

I've been watching the cable industry very closely, especially the last few years. They are increasingly tightening their grip on the content, aided by the fact that the signal is now almost completely digital (and therefore much easier to secure) from start to finish. It started when satellite companies injected an FM frequency into certain channels that a tuner box basically filtered out (for a monthly fee of course). Now, with the system being completely digital, your cable box acts like a node. It has its own MAC address and can be seen and managed remotely by the cable company. Now some systems are going completely digital, with no analog service to the home. You're forced to rent a smaller node for each additional television in your home. This allows them the ultimate in secure control.

There is no earth shaking market disruption like Napster to interrupt the cable industry's way of doing business. (Yes, I know there are a few tech-savy folks who VPN or port their IP addresses and stream content from home, but it still requires a cable subscription.) But really, unlike the recording industry, the cable companies have no reason to negotiate or change their business model. They saw what that did to the bottom lines of both the record industry and Apple, and they don't want to share their $$. Why would they?
Score: 16 Votes (Like | Disagree)

skinned66
Throw all of the worthless cable/satellite subscription based apps you want at me. I'm never going back.

"Another icon to hide" ad nauseam.
Score: 11 Votes (Like | Disagree)

considering this has never had airplay I am surprised they made an ATV app, sweet!
Score: 5 Votes (Like | Disagree)

Elbon
Yet another channel to disable. All of these channels that only work with a cable subscription are completely worthless to me.
Score: 4 Votes (Like | Disagree)

This is the company that invented the App Store, I'm sure they know what complications there are.

As for choice, choice of what?


Apple didn't invent the app store. Apps stores existed for PocketPC and Palm apps for years before Apple had theirs.
Score: 3 Votes (Like | Disagree)
Read All Comments