Samsung today introduced a new version of its Galaxy Tab, the Galaxy Tab S, at an event in New York entitled "Tab Into Color." Available in both 8.4 and 10.5-inch sizes, the Galaxy Tab S includes a high-resolution (2560 x 1600) Super AMOLED display. According to Samsung, the Tab S's display has a more accurate color range, better contrast, and higher outdoor visibility than an LCD display.

Billed as the company's new flagship tablet, the Galaxy Tab S is Samsung's "best tablet yet," according to the company, and also its thinnest and lightest at 6.6mm. "Tab S is guaranteed to turn heads wherever you go, and to give it a more premium look, we trimmed it in gold to give it an aura of luxury," said Michael Abary, senior VP of marketing for Samsung Electronics America. 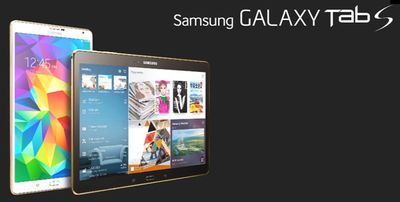 Along with a built-in fingerprint sensor, the Galaxy Tab S includes a "Sidesync" feature that mirrors one of the Handoff features that Apple announced with iOS 8. Sidesync allows the Galaxy Tab S to answer phone calls routed through a Samsung Galaxy S5 smartphone if both devices are on the same WiFi network. The Tab S is also able to remotely access a PC and multiple Tab S tablets in the same room can connect with one another.

Samsung's fingerprint sensor allows multiple users to share a tablet, accommodating up to eight different users. A fingerprint scan loads different users based on fingerprint, and also integrates with a new Kids Mode, allowing children unable to enter a password to unlock the Galaxy Tab S using a finger.

Samsung's Galaxy Tab S will run Android 4.4 (KitKat) and with its efficient display, it offers 11 hours of battery life. It will come pre-loaded with a slew of apps like Papergarden, an interactive magazine viewer, and the Galaxy Gifts widget, which will provide various offers like 90 days of free Google Music. Accessories for the Tab S include a Book Cover with multiple viewing angles and a bluetooth keyboard.

Apple is said to be working new versions of the iPad Air and the Retina iPad mini, but those are not expected to launch until the fall. The tablets are expected to include an A8 processor, an upgraded camera, and a Touch ID fingerprint sensor.

Not that it has the slightest bit to do with the product itself, but it perfectly sums up the chaos that Samsung's mobile devices line-up is.
Score: 125 Votes (Like | Disagree)

Where'd they get that idea?
Score: 54 Votes (Like | Disagree)

Not that it has the slightest bit to do with the product itself, but it perfectly sums up the chaos that Samsung's mobile devices line-up is.


Typing in different fonts is the next big thing
Score: 48 Votes (Like | Disagree)

Richardgm
They're thinner and lighter than the iPads, have longer battery life (11+h); and they actually look good.

CrazyForApple
There fingerprint sensor still won't be as good as Touch ID
Score: 41 Votes (Like | Disagree)

andjew94
Yay Samsung released a new tablet that no one will buy!
Score: 38 Votes (Like | Disagree)
Read All Comments

Thursday January 26, 2023 6:30 am PST by Tim Hardwick
The new Mac Pro coming later this year is expected to feature the same spacious modular design as the 2019 model, but with fresh concerns over its lack of upgradeability surfacing, some users are beginning to wonder what the transition away from Intel architecture actually means for Apple's most powerful Mac. The current Intel Mac Pro that Apple sells is popular with creative professionals...
Read Full Article • 514 comments