Walt Disney Studios launched Disney Movies Anywhere, a new online service and companion iOS app that allows you to buy Disney, Pixar, and Marvel movies and watch them across multiple devices. The service has a catalog of over 420 films, with individual movies costing $19.99 each. 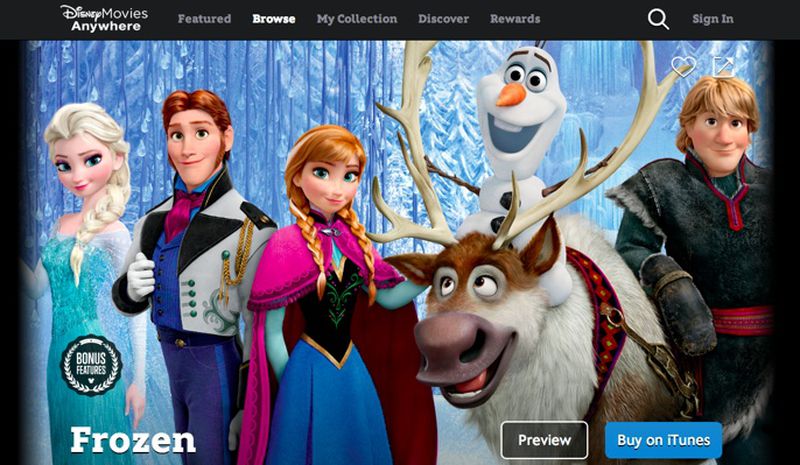 Powered by Disney's Keychest video-on-demand service, the Disney Movies Anywhere app lets customers browse or search through Disney's vast mobile library and then purchase titles for playback from within the app. The app streams the movie to an iOS device, with an option to download content for offline viewing.

Disney Movies Anywhere will be popular among families, and Disney has added parental controls to the app. Parents using the app on multiple devices can restrict viewing on a per device basis, allowing a parent to access the full catalog on their personal iPad and only G-rated movies on a child's iPod touch.

Apple users can link their iTunes account to the Disney Movies Anywhere app and sync eligible films with their iTunes library. In a launch promotion, Disney is offering Pixar’s The Incredibles for free to customers who enable this iTunes integration.

bushido
dying at those prices for a "file" especially charging more for HD in 2014. greedy bastards

cchanlatte
Another plus to this linking: Content previously removed in iTunes due to going back to the "Disney Vault" such as the Lion King is now accessible again. Nice!
Rating: 3 Votes

The iTunes integration is an excellent feature. Now we can watch movies when we're not on wifi. Can't do that with iTunes.


Sure you can....you can download the same way you can in the Disney App.
Rating: 2 Votes

Children's animation movies go on sale but rarely stay low. Toy Story movies, and virtually all major releases from Disney, Pixar, Dreamworks have stayed at $19.99. New sets of parents are always buying these movies. When we were robbed last year, one thing they made sure to steal was out archive collection of DVDs. They left most of the movies, but took all animation and TV series.
Rating: 2 Votes

2457282
Need to also get this on the ATV. Seems very nice for families with children, although $20/movie seems like a bit high, IMO.
Rating: 2 Votes

Looks like the Thor/Captain America issue has been fixed.


This worked perfectly, thanks. They popped right in.
Rating: 1 Votes

I agree, I don't know why I would use this app over my iTunes match videos access :confused:


This app includes a bunch of extras, which is a huge feature for a lot of people (myself included). In addition, it's almost like a playlist of specifically Disney movies. Some people are enjoying that for their kids/selves.


Thor & Captain America are Paramount titles. I've called DMA support, they said that Disney is working on the licensing issue and it should automatically roll into the app in the next couple of weeks.

Can someone tell me exactly how to download the HD copy of a SD Digital copy I have in my iTunes already? I've been re-downloading some films and they still come in SD.


This only applies to Disney digital copies that were redeemed since 2008. If you have the SD copies stored locally, delete those from your library, then go to the iTunes Store under the Purchased section, and they should be available for download in HD.

I too can't seem to access HD downloads in the Purchased section of the iTunes store. It only has SD versions of my movies available, which I already have. Also, the movies available in the Disney app with a digital copy that was not available in iTunes still are not showing up there. As far as I can tell, the only way to view those files is in the app - anyone else having the same issue?
If you've been able to download HD iTunes versions of SD digital copies you previously owned, along with digital copies that weren't available through iTunes (i.e. Robin Hood, Sword In The Stone, Winnie The Pooh) please post a step by step for the rest of us. Thanks!


See above. If you have the SD versions already downloaded to your library, delete those versions (move to trash) and then go back into the iTunes Store under the Purchased section to re-download them in HD.

I'm not having the issue with DMA copies not showing up in iTunes - the content in my app is the same content available in my iTunes, although when I searched for it in the Purchased section of my iTunes, I realized that all of the Disney movies were at the very bottom of the list, rather than at the top where the "most recent" purchases were.


All of my digital copies are from Bluray's. It appears that Captain America & Thor aren't being upgraded for anyone. Hopefully this was just an oversight and they get added eventually.


See above. They were originally released as Paramount titles. According to DMA support, Disney is currently working on this issue and the titles should be available in the app sometime in the near future.
Rating: 1 Votes

Larsennet
If you bought the SD version from iTunes it will not upgrade to HD. Only Digital Copies upgrade.

For example, I have 3 Pixar movies that I bought directly from the store a few years ago. They did not upgrade but all of my 21 Disney/Pixar/Marvel Digital Copies has been upgraded to HD with a couple of exceptions.

Thor, Captain America, Iron Man 1&2 are Paramount movies but Disney bought the rights to them last year Source (http://www.bloomberg.com/news/2013-07-02/disney-buys-rights-to-four-marvel-movies-from-viacom-s-paramount.html). I have SD digital copies of all except the first Iron Man. Only Iron Man 2 upgraded for me. I'm hoping this is a mistake and they add Thor & CA.
Rating: 1 Votes
[ Read All Comments ]