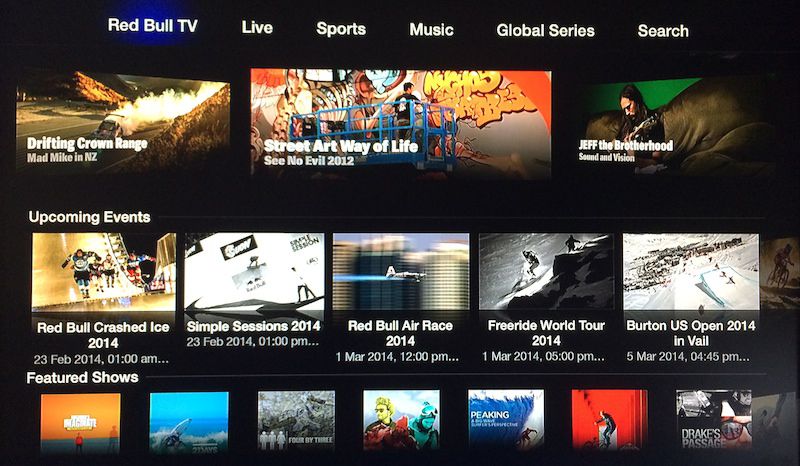 Red Bull TV has also been available as an iOS app for several years.

Red Bull TV is just the latest in a long line of channel additions for the Apple TV over the last six months, with the most recent major expansion coming last month with the addition of Watch ABC, Bloomberg, Crackle, and KORTV.

Elbon
Great. Another channel to hide.

zedsdead
How about we get to choose which channels to add...you know...like a channel store.

What's so hard about this Apple?:mad:

I don't want these channels...I want Netflix, The Blaze, Amazon.com, and maybe a few others...thats it. Let people develop for this already.

I hope the WWE Network is a glowing success. I don't watch it anymore, but at least they are doing the right thing.
Rating: 10 Votes

2010mini
The responses in this thread are so typical.

For years people complained how little content Apple TV had. And berated apple for under using it.

Now these same people are complaining that apple is adding content.

Make up your minds
Rating: 6 Votes

They need to add some real stuff...and soon.

How about an NBC Sochi Olympics channel where you can watch all of the competitions without have to mess around with airplay mirroring from an idevice?

Eightarmedpet
The interface is really looking dated now... looks like the internet when websites were built using tables.
Rating: 5 Votes

aprofetto8
The Canadian rule of thumb:

For every 15 channels added to the US Apple TV, add 1 channel to the Canadian Apple TV, and remove two thirds of it's content.

So much potential for this damn Apple TV. I want to see a NFL app, an MLB app, and NBA app, etc. Each with a simple subscription service. I can dream...
Rating: 4 Votes

Apple TV UI is a mess. Slow to navigate. Impossible to organize. I'm thinking an iOS 7 inspired update is coming this year.


iOS 7 inspired wouldn't make the TV interface better. Plus, the light colors are not a good idea on a tv interface. Apple really needs to re-think how the UI works. Slapping some new paint on the UI isn't going to solve any of the problems. It's sad that the Roku 3 has a much better UI than Apple TV and Roku clearly does not have a great UI team (but they do understand their users).
Rating: 3 Votes

MikhailT
I'm glad Apple's expanding the content with more channels. Why? Because it is quickly showing how horrible designed Apple TV is. It was slightly okay when it was just 3-4 channels.

Why are they going after all of those content if this is just a *hobby*. They need to get over it and release new update with A7, 802.11ac, and an app store, along with a completely redesigned interface. Hopefully, not as white as iOS 7.
Rating: 3 Votes

You know what would help AppleTV sales....

Or just a Channel Store and API. All the content I want is on the iPad getting to the TV without turning the iPad on would be nice.


It is not Apple that is preventing this. It's the content providers/owners that are.
Rating: 2 Votes