Last year's hit game Tomb Raider, which was critically praised for successfully re-imagining iconic video game character Lara Croft for modern times, is finally available on Mac. The Mac version of the action adventure game, which was ported by Feral Interactive, arrives just under a year after it first launched on PC, PlayStation 3 and Xbox 360. 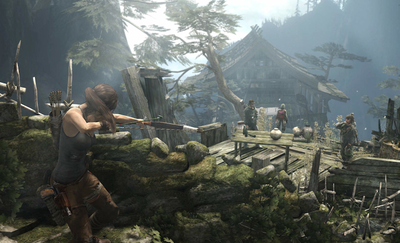 When a young Lara Croft is shipwrecked on an uncharted island, she enters a fight for survival armed with nothing but her instincts. Help Lara perfect her natural gifts as she embarks on a perilous journey to save her friends and escape the island’s murderous inhabitants.

The game launches exclusively on the Mac App Store today, and will arrive on other digital storefronts, like Steam, on January 30. Although Tomb Raider is primarily known for its single-player campaign, it has an online multiplayer component. That multiplayer is not available on the version purchased from the Mac App Store. Players who wish to play online multiplayer will have to purchase the game on Steam, as the game requires a Steam account to take part in its Mac-to-Mac only online play.

Tomb Raider is available in the Mac App Store for $49.99. [Direct Link]

nawoo
I'm laughing at the price. Steam on PC has it for less than $10 and Mac gamers have to pay $50 for it. What a ripoff
Score: 5 Votes (Like | Disagree)

Are you sure? Take a look at this: http://www.amazon.com/dp/B007VFHGZ4

If you want to redeem your $3.99 amazon steam code... Then you can download the mac version when it's released on steam in a few days.
Score: 3 Votes (Like | Disagree)

Set the mac version on lowest 800x600 resolution with all graphical options turned off, when loading rich graphic, it is not playable.

Steam windows version run on boot camp with windows 7. All graphic is turned on at 1680x1050 resolution. The game runs smooth.


You are saying all this using a pirated stolen copy which is probably not the real mac game from Feral! If you actually pay for a game and play in on a supported Mac computer they perform very similary.

I can only assume your pirated copy is some WINE based hack or your mac is under the Mac supported specifications in some way.
Score: 2 Votes (Like | Disagree)

edddeduck
Hi all, here are a few answers to all the questions asked so far, I think I covered them all. :)

I'm not sure if they couldn't include multiplayer in the MAS version with some kind of Steam login requirement.

You can't use Steam multiplayer in any version of the game but the Steam version. Just like you can't use GameCenter/iCloud unless you are selling your game in the AppStore. They are mutually exclusive.

When will Mac gaming finally get some love like PC does?

Mac games are always too little too late (except for WoW and D3) and too expensive.
Not to mention they always run better on Windows, even when playing it in Bootcamp.

The game is the same price on the PC and Mac (Steam was on a flash sale recently when the deal was mentioned) but the MAS price is same as the Steam RRP.

The Mac version of Tomb Raider is in the same ballpark to the PC version on most modern cards. The Intel cards are a slower (due to drivers) but they are still nice and smooth on default settings.

FYI we targeted 10.9.1 as the min OS to get the maximum optimisation and experience of the game on the Mac. You couldn't get this level of performance and graphical quality using 10.8.5 or older. It uses all the latest features of Core OpenGL that Mavericks brings to the table.

Why is it like that for some games? Something makes it difficult to implement networking between games running on different operating systems?

We almost always do (XCOM for example), however Tomb Raider multiplayer on Windows uses middleware that wasn't available to the Mac, so the multiplayer code had to be developed from scratch for the Mac version. Sadly, because we aren't able to see the original code, it's impossible to make x-platform multiplayer for TR.

How do you control these games on a mac? Do you get a bluetooth controller, or mouse and keyboard...?

The Mac version supports Keyboard/Mouse and over 100+ gamepads from the 360 to the all versions of the Playstation pads from PS1 to PS4. I don't know of pad that we can't support as long as it has enough buttons :)

It's the same RRP as the PC on Steam. :) If you buy a Steam key from any store you get the Mac version! The definitive version is (for now) a console exclusive.

Do we know for certain this will be a Steamplay game? Batman Arkham Asylum has been out for the Mac for a while, but its not a Steamplay game as of yet (though Arkham City is).

Yes, all Feral games (on Steam) are SteamPlay and we have stated as such in the press release and on our social media pages :)

I just checked steam.... It's $50 right now.
This title will also be steamplay. So we're hardly getting 'ripped off'.

I'm laughing at the price. Steam on PC has it for less than $10 and Mac gamers have to pay $50 for it. What a ripoff

I just checked steam.... It's $50 right now.
This title will also be steamplay. So we're hardly getting 'ripped off'.
Score: 2 Votes (Like | Disagree)
Read All Comments