Watch your favorite movies and shows instantly on your iPhone, iPad, or iPod touch from wherever you are. Buy or rent movies by visiting Google Play Store on any computer and watch them from any device over Wi-Fi using the Google Play Movies & TV app.

Limited content for iOS users has been an issue for Chromecast since the device was first launched in July. Though Chromecast was designed to compete with the Apple TV and Roku set top boxes, Chromecast users on iOS have been restricted to movie and TV content from apps like Netflix and YouTube that have implemented Chromecast support, while Android users have had prior access to movies and television shows from the Android version of Google Play Movies & TV.

Other apps, like HBO GO and Hulu Plus implemented Chromecast support after the device was launched, but it still lacked a comprehensive alternative to iTunes. 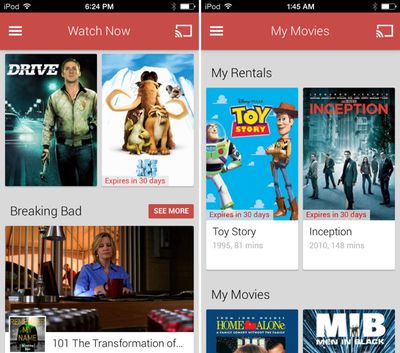 With the addition of Google Play Movies and TV to iOS, Chromecast users have a much larger library of content to access, which puts the device more on par with the Apple TV. The Apple TV has long had support for iTunes, which gives users the opportunity to purchase movies and television shows. Chromecast users with iOS devices, like Apple TV users, can now access a service that provides a wide range of recent movie and TV show downloads.

As noted by Gizmodo, content sent to Chromecast from the Google Play Movies and TV app will be in full HD, but content viewed on an iPhone will be limited to standard definition. There are a few other drawbacks with the app as well -- content can only be streamed over Wi-Fi and there is no option for offline viewing.

Google's Chromecast can be purchased directly from Google for $35 and it is also available from a number of third party retailers like Amazon and Best Buy. Google Play Movies & TV can be downloaded from the App Store for free. [Direct Link]

Because they don't have an Apple TV?

Because they have a variety of devices?

A lot of reasons.


There you go, trying to be logical, rational and open minded. :D
Score: 28 Votes (Like | Disagree)

Why would anyone at all pick this over iTunes?

Because they don't have an Apple TV?

Because they have a variety of devices?

SeattleMoose
I try to avoid everything Google...

Their business model was based on "free" products from Day 1. "Free" turned out to have a huge price tag....privacy. And so it continues today.
Score: 17 Votes (Like | Disagree)

Asuriyan
Why would anyone at all pick this over iTunes?
Score: 17 Votes (Like | Disagree)

I understood/understand they created the search giant google... but they have absolutely done things with absolutely NO true innovation after that, and have just punk'd the average consumer with driven deceptive strategic target marketing that the average joe has not a clue about.

I just know I am not one of them... except for gMail.

I'll still always use Google Maps though... best cartography for past 3-5yrs.


So, you're not "one of them" because you don't use Google search  but you do use Gmail and Google Maps? :eek:

That's like an alcoholic saying, "I'm not one of them. I don't drink whiskey, except with water or a beer chaser. And I'll still always drink wine." :D
Score: 11 Votes (Like | Disagree)

I know you are being sarcastic....
But, I must point out... this helps out Apple, more than it harms them. We all know that for YEARS iTunes ran @ break-even... Apple would MUCH rather get you in a hardware buying cycle than, for example, buying some mp3s on your PC. The content is only available to create an ecosystem that is easy to use & hard to leave.
Google just lost that as leverage themselves... to whit: a user can say to themselves "I want to leave iOS, but I just have too much purchased content that would be a pain to convert & reorganize for Android... I have so many movies, song playlists, & even television show subscriptions. I had best stay." However they can NOT now say "I would like to leave Android to try Apple... I just can't because I don't want to lose all my Google Play purchased multimedia", as it would seamlessly come with them. This is a HUGE win for Apple!!! Easier for quality (cash spending) customers to switch.
It makes sense for Google too.... since they do not make money off the Android OS, a single iOS user that purchases heavily from Play store would net them much more than a dozen Android users that rarely, if ever purchase content from the Play store.
Score: 10 Votes (Like | Disagree)
Read All Comments