Following last week's introduction of Parallels Desktop 9, VMware has announced the launch its new VMware Fusion 6 virtualization software, adding support for OS X Mavericks and Windows 8.1, as well as a number of other new features.

- Designed for Mac OS X Mavericks - Extend the unique features of Mavericks to a Windows environment, such as taking full advantage of every display connected to a Mac with multiple display support and enhanced dictation support in Windows applications.

- Optimized for the Latest Macs - VMware Fusion 6 is optimized for the latest Macs taking advantage of Intel's latest Haswell processors for even better battery life and even faster performance when running Windows applications.

- Create the Most Powerful Virtual Machines - Create virtual machines with support for up to 16 vCPUs, 8 TB virtual disks, and up to 64 GB of memory to run the most demanding Windows applications on a Mac.

- Enhanced User Interface - From its streamlined user experience and improved PC migration assistant, to easier installation of Windows and more granular selection of computer resources, everything has been enhanced to give users an even better way to run Windows on a Mac. 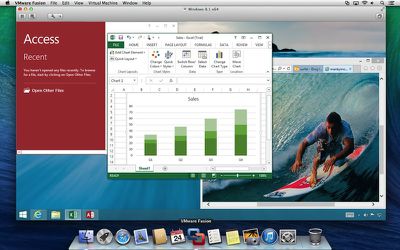 and let the parallels vs fusion arguments begin!!

tigres
damn, these yearly required upgrades are so tiresome. I think I have paid them nearly a grand over the years.

Bootcamp is great if your Windows instance absolutely needs all the resources of your machine, as in gaming.

Or more: my rMBP is powerful enough to run several virtual machines at the same time. So I can have Windows XP, Windows 7, any of several flavors of Linux, all accessible simultaneously.

In my work it's necessary that I have reasonably quick and portable access to different versions of various OSes with different versions of various software. Virtual machines make that possible. I have a nice USB 3 external drive with my less-used VMs on it; I just velcro it to the back of my rMBP's display when I need it. Connected via USB 3 or Thunderbolt, the VMs run at native speed. (For external storage, USB 3 and Thunderbolt are pretty evenly matched, as the drive is the bottleneck in that case.) If I'm using a particular VM frequently for a project or something, I'll copy it to my rMBP's SSD. Currently I have four VMs resident on the SSD.

Within the last hour I've had Win7, WinXP and Linux Mint all running at the same time as OS X. Can't do that with Boot Camp.

If I don't need a VM that's currently on my SSD, I can just copy it to my external drive and reclaim the disk space in my laptop. Can't do that with Boot Camp either.

If I screw up a VM, I can just pull an earlier version from my Time Machine backups. Can't do that with Boot Camp-- lots of folks don't realize it until it's too late, but Time Machine doesn't touch the Boot Camp partition. Or, I can make snapshots of my VMs and revert to them if desired. (They take up beaucoup disk space, though.)

I have VirtualBox too. It has improved greatly in recent years. Its USB handling still lags behind Fusion's, but it may be fine for your purposes and is free. If you're not a gamer, I'd recommend it over Boot Camp for running Windows or Linux.
Score: 5 Votes (Like | Disagree)

I installed it, it replaced VMWare Fusion 5. It crashes each time it attempts to launch. I restarted. will reinstall now. I don't have a list of things to try, to fix it.

It's expensive to live in Apple land. I think everybody knows that by now.


What are you talking about? Unlike windows, OS X gets cheaper to upgrade every release.
Score: 2 Votes (Like | Disagree)
Read All Comments