Apple is the number one target for "patent trolls", with 171 cases total in the last five years, according to PatentFreedom (via Fortune). This puts the company ahead of Hewlett Packard, currently in second place with 137 cases, and Samsung, with 133. Dell, Sony, HTC, and LG all made the top 10 with a combined 1,218 cases between them. 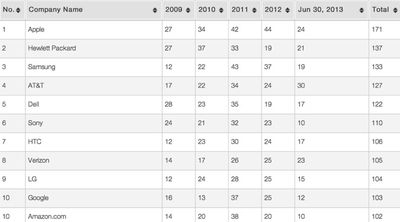 A patent troll, or "non-practicing entity" (NPE) is defined by research firm PatentFreedom as "any entity that earns or plans to earn the majority of its revenue from the licensing or enforcement of its patents".

Michael Brody, an intellectual property specialist at Winston & Strawn, told an audience at Stanford University earlier this week that a patent, "is nothing more or less than a license to sue someone" and claimed that in 2012, more than 4,200 separate companies or individuals were sued by NPEs, with the average licensing cost for cases settled out of court being around $29.75 million.

Over the years, Apple has faced litigation from a number of patent-holding companies like Lodsys, which targeted app developers over in-app purchases, and VirnetX, a company that was awarded $368.2 million over VPN connectivity in Facebook in 2012.

Apple faces a new lawsuit filed today by Remote Locator Systems, alleging that Apple's "Find My Friends" and "Find My iPhone" apps violate a patent held by the company.

So, exactly how would research based companies like Alcatel-Lucent, which do their own research and sell that IP, make money? Some companies (and universities!) butter their bread with IP they produce themselves and without producing much else.


Here's the problem: It's absolutely fine for these companies to get paid for something that I want to do, and that I cannot figure out myself. If Apple had looked into the patent database 171 times for things they couldn't figure out themselves, copied what they found, and used it without paying, they would deserve to be sued.

But finally, what argument do you have that these research companies should have the right to prevent me from inventing things myself? There is a good argument for copyright. If you do the hard work to write a book, or some music, or some software, then I shouldn't be allowed to _copy_ what you did. But it would be absurd to think that I shouldn't be allowed to write a book, or music, or software, just before you did so first. But that's what patent law says. Just because someone "invented" something, I'm not allowed to invent it. There's no reason why this would have to be so. Might be tough for some companies, but then the car was tough for makers of horse carriages.
Score: 13 Votes (Like | Disagree)

the biggest patent troller just got trolled. maybe now will apple learn something and stop this.

Are you under the impression that Apple is a non-practicing entity for some reason?
Score: 13 Votes (Like | Disagree)


"We've patented the Hell out of this thing, and we intend to protect our intellectual property" -- to paraphrase Steve Jobs during his iPhone presentation.

2007: Ballmer laughed. "No physical keyboard!" he bellowed. Most people couldn't see the point in an iPhone; over-engineering a problem that doesn't exist, they said. "Apple to add a physical slidy-keyboard in the next iPhone", everybody hoped (yes, really, there was a huge amount of speculation about that).

RIM laughed, and kept their phones the way they had their phones. Phones running Android slowly took away keys and made them more touch-oriented -- but that took some time.

I think you'd feel much differently about your intellectual property had you sunk millions into R&D, hardware, software, supply chain, agreements with carriers where your phone is your phone -- the lot. Apple put their balls on the line, and the rest reap the rewards.

And what happens? 6 years later, we're reading "live by the sword, die by the sword" comments. This is MacRumours FFS, it's meant to be a community of Apple enthusiasts, not a community of people scrambling to write their oh-so-witty comment first.
Score: 12 Votes (Like | Disagree)

jav6454
We need a reform in our patent system. It completely blows and allows leeches to mooch off company's efforts. Regardless if said company is Apple or not. Patent trolls stifle innovation everywhere.
Score: 11 Votes (Like | Disagree)

They could license the patent. Patent trolls are people who buy patents from those companies then sue other companies. No one would really have a problem with the company that developed the patent suing, unless it is a bogus patent.

Well, IP companies make their money by licensing their patent, so it is in their best interest to do so. Large companies tend to flip them off and steal their IP under the assumption that if they try to sue, most likely their IP will be invalidated or they'll just be buried. Which is a safe bet, so smaller companies sell their IP to larger clearing houses, or at least sell the rights to distribute the IP to larger clearing houses, so they don't have to put up with these shenanigans.

On the other hand, if they don't want to license, because it is THEIR PROPERTY, and they plan to commercially exploit it differently, that's their right as an inventor.

Does this make Kodak a patent troll now?

Yes. And apparently any other company that does research and produces IP as a product. As a matter of fact, if all you have is IP for sale, you're basically a Somali pirate trying to stifle the brilliance of HP in their endless pursuit to make another paper munching beige box. Apparently, according to the internet, you're not allowed to do that or you're a "troll".
Score: 7 Votes (Like | Disagree)

So, exactly how would research based companies like Alcatel-Lucent, which do their own research and sell that IP, make money? Some companies (and universities!) butter their bread with IP and without producing much else.


They could license the patent. Patent trolls are people who buy patents from those companies then sue other companies. No one would really have a problem with the company that developed the patent suing, unless it is a bogus patent.
Score: 7 Votes (Like | Disagree)
Read All Comments