Primate Labs has announced on its blog that it has released Geekbench 3 – the first major update to the popular benchmarking service since 2007.

This third iteration of Geekbench features 15 completely new benchmark tests that are designed to mimic real-world processor tasks, such as image and signal processing, encryption, and physics simulation that aim to give a more accurate score of the processing power of computers and mobile devices. The previous benchmark tests imported from Geekbench 2 have also been completely rewritten so that they are now more representative of real-world applications and usage scenarios, again allowing for a more accurate score. 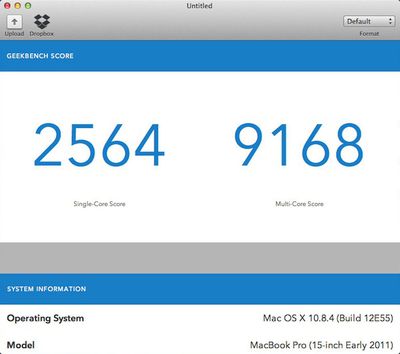 Geekbench 3 features a completely new scoring system whereby users now receive separate single-core and multi-core scores – in previous iterations of the program, the scores were merged together into one. Primate Labs' John Poole explains why this new "splitting" of the scores is important:

The iOS version of Geekbench has also been updated and now features a completely new look that matches the flat interface of iOS 7. There is also Dropbox integration, so results can be shared with anyone without having to go through the Geekbench Browser, and an archive feature so users can easily view previous test results.

A demo version of Geekbench 3 can be downloaded from Primate Labs' website, with separate versions available for both iOS [Direct Link] and Android devices.

Many people on this forum put too much emphasis on Geekbench scores without considering the software and conditions they will be using. At some point it's almost like a 'my Geekbench is higher than yours' thing.
Score: 2 Votes (Like | Disagree)

Koulie
Oh damn, the combination of 'Geekbench', '15', 'New Benchmark', 'Released for Mac' is deadly; got me jumping-out-of-chair excited.

Heck, I was still hyped until my 3rd re-read. Then I realised it was not news on the the Haswell rMBP :(
Score: 1 Votes (Like | Disagree)

jonnysods
Good. Now I want to get some real tests for the new Mac pro vs a new iMac when it gets released.
Score: 1 Votes (Like | Disagree)
Read All Comments

Friday December 2, 2022 10:54 am PST by Juli Clover
Google is continuing on with its attempt to convince Apple to adopt the RCS messaging standard, publishing a new "it's time for RCS" blog post. Promoted heavily by Google, RCS or Rich Communication Services is a messaging standard that is designed to replace the current SMS messaging standard. It provides support for higher resolution photos and videos, audio messages, and bigger file sizes, ...
Read Full Article • 578 comments